When you think of the Middle Eastern country of Yemen, not many people know a lot about this country. It is the second largest country in the Arabian Peninsula and has a very rich ancient history. Although today the country suffers from various economic, political, and social issues, it was one of the wealthiest Arab nations in the past. Here are some of the most interesting facts about Yemen!

1. The southern part of the Arabian Peninsula, now known as Yemen, was previously known to geographers as Arabia Felix; a Latin name meaning ‘Happy Arabia’ or ‘Fertile Arabia.’

2. Yemen is now the poorest country in the Middle East.

3. Architectural and history buffs alike will love the Old Walled City of Shibam. As a UNESCO World Heritage Site, the city is home to more than 500 towers that are made entirely of mud brick. Sorry Manhattan, but the 11-storey towers were the first skyscrapers to be built in the world.

4. Interestingly, it is customary for Yemeni males to carry a ‘Jambiya’, or curved dagger, in public – the handle shows the social status of the individual whilst it is thought that the presence of such a weapon reduces the risk of brawls or fights.

5. Yemen’s Mocha city was once the centre of the world’s coffee trade – Yes, Mocha, one of the world’s best-known types of coffee, was named after this city, which is on the Red Sea coast in Yemen.

6. Isolated Socotra, 355 kilometers (220 miles) from mainland Yemen, is home to a panoply of strange plants and animals uniquely adapted to the hot, harsh, windswept island. A unique tree, the Dracaena cinnabari or the dragon blood tree grows here. The island was recognised by the United Nations Educational, Scientific and Cultural Organization (UNESCO) as a world natural heritage site in July 2008.

7. Yemen is part of Biblical tales and legends. Noah knew it as “the land of milk and honey.” The Three Wise Men presented the infant Jesus with myrrh and frankincense from its mountains, and some claim it is the Queen of Sheba’s home.

8. Sanaa’s Old City is believed to have been built by Shem, son of Noah, making it one of the world’s oldest cities.

9. Yemen was home to the ancient Queen of Sheba (also known as Balqees in Arabic) who was mentioned in both the Bible and the Quran. The ‘Kingdom of Saba’ – the most powerful and important kingdom in the region at the time – was believed to have existed in the first millennium BC, and was located in modern day Marib. The ancient Sabean people who lived under Queen Sheba’s rule spoke an old Semitic language which is still used on the island of Socotra.

10. Yemen’s Dar al-Hajar (The House of Stone) is an iconic building that was carved out of one enormous rock. Although only three stories are visible, the lower two stories are built within the rock structure itself. It was once used as a palace for the ruling family but is now open to the public as a museum.

11. Another interesting fact about Yemen is that all of its neighbours are kingdoms or emirates, so Yemen is the only republic in the area. This is a point of pride for the people from Yemen.

12. Even though it’s a republic, Yemen’s obedience to the Muslim religion is very strict and this makes it a conservative country. Homosexuality is an offence punishable by death, women cannot be photographed, and many other strict rules should be followed in Yemen.

13. Jewish silversmiths from Yemen were well known for their excellent craftsmanship. They ruled the precious metal craft production in the southern Arabian Peninsula from the 18th to the mid-20th century. The silversmiths produced jewellery with fine filigree and granulation work. Their work won admiration all over the world.

Due to the ongoing civil war, all flights to Yemen are currently suspended. However, you can reach Yemen by road, crossing the Yemeni-Omani border posts. The Saudi Arabian border is another option but is more difficult. Buses are easily available to cross the border and reach Yemen. If you are looking for an economic option to reach the country, ferries are your best option. You can reach Oman and Saudi Arabia from India by any of the domestic or international airlines such as Air India, Etihad Airways, Gulf Air, Qatar Airways, etc.

The Ancient Tombs, Sana’a: There are several ancient tombs which date back to the Palaeolithic era in Yemen. In western Yemen, in the Al-Mahwit region, which is situated in Sanaa, there are hundreds of ancient graves worth exploring. Do visit the old city of Sana’a as well.

Socotra Island: One of the most fascinating locations on the planet, Socotra Island has often been described as the ‘most alien-looking place on earth’. It is so isolated that a third of its plant life is found nowhere else on the planet. Notable are the dragon’s blood trees that look like flying saucers perched on trunks. Some people also believe that the island with its biological diversity and isolation was the original Garden of Eden. Whatever the theory of its origin there can be no doubt that it is one of the most beautiful places in Yemen with its varying landscapes.

Old Walled City of Shibam: This is the place for architectural and history buffs attracting people with its towers that are made entirely of mud brick. Designated a UNESCO World Heritage Site for these buildings, Shibam has sometimes been termed the ‘oldest skyscraper city in the world’.

Jabal Haraz: This hilly region located in the amid Sana’a and Al-Hudaydah was named after the Haraz mountains offering a spectacular site to visit with its terraced lands and medieval villages built like fortresses built at the edge od the cliffs. One of the most beautiful and well-preserved medieval towns in the region is Al Hajjarah, clinging to the edge of the mountainside and a popular base for trekkers. Due to the current situation in Yemen, special permits are required to visit the place.

Thula Village: This is one of the most beautiful villages in the Sana’a region. This city is dated back to the Himyarite era and is well-conserved and contains ancient houses and mosques worth visiting. Narrow alleyways meander through the old sandstone houses built closely. About 600 houses built in the same characteristic decor and style give this city its unique character. 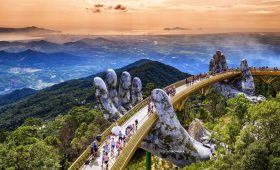 Most Interesting Facts about Vietnam