As you would know, Neeraj Narayanan’s book ‘This Guy’s On His Own Trip’ is now available. You can buy a copy on Amazon, Flipkart, or Notion Press.

Below, Nero chronicles the #bookjourney since its release on July 31, 2020, as the world pours in their love for him.

Abhay Tyagi (done three trips with OHOT and now one of my closest friends) did what only Abhay does. Knowing that the book crossed 1000 copies overall (paperback + kindle), he searched all over the internet, called up Swiggy Palakkad, and sent got samosa delivered to my house. I looove samose! There is only one restaurant in Palakkad that serves north Indian samosa. Why why why are you like this, Abhay!

So many people received the book over the last two days! So excited. Lots of pics coming in. Do check my Insta feed @capn_nero and stories on @onhisowntrip to see all the pretty pictures.

Radu asked me for a leave from work so that she could read the book. Haha, it was so adorable that I agreed.

Today is a very very special day. One of my professors from MICA, received the book, and made a video and sent it to me. It has touched me in ways I can’t describe.

Dwarika sir taught me during my initial days in MICA. Back then, I noticed his charm, his wit, his casual informal style, and how wise he was. It’s a pity that he taught us just one subject. When I quit my job and began to travel, he always followed the stories, encouraged me many times. When I went to many countries, he would try to put me in touch with people he knew there, so that it would be easier for me there. We never met after 2008, but he always cheered me unconditionally. His generous nature, his willingness to help a boy who he had briefly interacted with a decade ago, always made me feel very grateful but I wasn’t able to reciprocate the gratitude I felt.

Four days before the book released, the publishers sent me five copies of the book. My father asked me whom I would like to give them to. I didn’t know who to pick since there were quite a few relatives and close friends. Casually dad mentioned if there was any professor across my school, college, and MBA years that I would like to give it to. The first name that came to my mind was Dwarika Sir. (@deval kartik maam you also). In the entire mess of COVID and demands, I couldn’t finally send the book.

But hearing of its release, he bought it himself. And today, he sent me this video. It’s short, it’s sweet and I don’t know why but it’s touched and overwhelmed me more than anything.

This post is a tribute to a wonderful human being, and to a man, I proudly call my teacher.

Dwarika sir, thank you. For this, for teaching me, for all the support. I will never forget you in my life. And like you said towards the end, “one day we shall travel together”.

@shinethephoenix sent me this pic of her best bud Shiloh with the book. Apparently, Shiloh is quite protective of the book as you can see how his paw is guarding it. At the same time, I am not really sure if Shiloh likes the book too much as he is snoring away to glory the moment he turned the pages. Oooops! 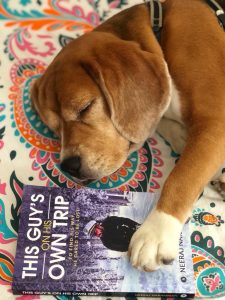 Chandrika got all her friends to dress up and pose with the book. Not just did they take pictures, someone clicked a video of all of them reading the book.

Changu came with me first to Meghalaya in May 2019, and ever since we have just grown closer and closer as friends. So touched by this gesture.

Some people started sharing creative pics taken with the books. One girl, Revathi, whom I have never met or known, sent a pic with a book placed on a nice glass table with a bottle of wine, a glass, and the most adorable Chow Chow puppy staring at it. I gurgled looking at the puppy and wondered why it was staring so intently at the book. On closer look, I figured that Revathi had placed a small muffin close to the book, and that’s why the pup was looking at it forlornly. How sweet of Reva!

Finally got a pic of the book with some samosas and chai. Yay yay! Thanks, Shrimayi! 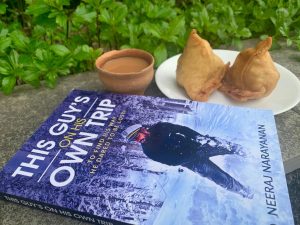 August 12
We are getting so many good reviews about “This Guy’s On His Own Trip” on WhatsApp, inbox, messengers, Instagram! It is quite overwhelming. This girl, Komal, whom I had met 3-4 years ago sent a beautiful message, and it brought back so many sweet memories. Knowing that all these people are liking the book is giving me a little more faith and confidence that the book is half decent. Maybe if we could somehow get it to reach more and more people outside our circle, we would see the book get popular. 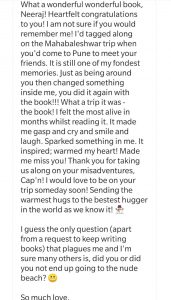 August 11
These two girls, Mudita and Rosalin, wrote beautiful reviews about the book on Instagram. Check out their reviews on @teaspoonof_joy and @abhiros25
August 10
Ecstatic right now! A book store from Chennai called me up and said they had ordered 10 copies of my book from the publishers!! Months back when my publishers and I were in discussion, they had mentioned that these days 98 percent of all book sales happen online, and not in bookstores, so they would focus on only selling online. I had agreed but I was quite disappointed that it wouldn’t be available in physical stores. For years I had dreamed of being an author one day, and then strolling into a book store and seeing my book sitting on a shelf. When the Chennai Bookstore said they would display my book, a dream came true. I wish I will be able to go to the store someday and look at it!
August 9
Did a Zoom session event about the book launch with people who hadn’t read the book. 27 people attended, and it’s a huge number to handle online if you want to do a two-way engagement session! Spoke about my journey as a writer ever since I was a school kid, and how I changed over the years. It was a hugely interesting session with people asking many questions about how characters and moments are built in a book, and if I truly remember conversations from seven years ago. They shared their own anecdotes too. The funny thing is that the discussion shifted often to traveling and trips and how we all want to travel together soonest.
A Chennai online Bookclub “Pick a Book” invited me to speak to their audience (over Insta Live) for a few minutes. I was supposed to tell them what the book is about. The moderator, Sukanya, is wonderful. I love the way she handled the session, especially the starting when people enter the session. She greeted each person individually, spoke a few words to them, and made them feel very comfortable. That’s how moderators should be.
August 8
A YouTuber “Paperback thoughts” reviewed my book. I don’t know him, so it makes me happy that he liked the book!
August 7
Sales have crossed 500 paperback copies. Hit 500 in a week, so am very happy.
Vinit Kharpate sent me a text saying he got the book in Vancouver (Canada)! Vinit was my flatmate in Chennai 13 years ago. I am so so happy that he got the book without us having spoken about it ever. Back in 2007, I had shifted into this beach house in Chennai with some random boys. Vinit was one of them. Every day we would all come back from the office, play some indoor cricket, laugh and rib each other for hours, eat dinner and watch tv together and stay up till the wee hours of the night. Over the year, all of us became very close. Then one by one everyone started leaving the house, to move back to their home cities. The house was never the same again, with new flatmates. As the years passed, we stayed in touch on and off. So happy that Vinit will read the book 🙂
August 6
Rishabh bought 8 copies for his friends and relatives. It damns sweet of him to do that!
Wondering if we should stock some copies so that we can give out signed copies if anyone wants them later!
August 5
“This Guy’s On His Own Trip” book is available internationally on Amazon US, Amazon UK, Amazon Australia, Amazon Germany, Amazon Canada, Amazon Spain, and www.barnesandnoble.com.
Till now, book dispatch and delivery were showing over 20 days. Quite a bummer! But now starting August 5, the books will be printed in a day and shipped within 2 days, making the process much much faster! Yay Yay!
August 4
I published a post on Facebook about my journey as a writer. Unbeknownst to me, a couple of my friends instigated the whole gang to share it, and the post got more than 90 shares! I have the best friends in the world 🙂
Sangeeta and I were talking over the phone. She is making her entire team get the book. She asked them all for their addresses and is buying it for them. How mad is she! She tells me, “whoever doesn’t give me their address by tomorrow, I’ll mark them for leave of absence from office”. Hahaha! I want to run to her and give her a tight hug!
August 3
My friends have gone mad. Srinath bought 4 copies of the book from Flipkart, Amazon, Notion Press, and Kindle! Krishna has bought over ten copies! And I don’t know how many more of my friends have bought multiple copies just because they want to help the book sales. A huge thank you to the universe.
August 2
Sakshi Pant read “This Guy’s On His Own Trip” and immediately put up a video as her Insta story. She started gushing about how much she liked it, and when I saw it, I felt very overwhelmed. Sakshi and I know each other for over four years now and have been such close friends. Over the last 1.5 years, since she joined the team, a lot of conversations are work-related, and hence become slightly mechanical. So when I saw this video and how she felt, it made me feel very happy. I wish I could just teleport and go hug her!
August 1
We have made it to Amazon’s bestseller list in Travel Writing and guess what?!!! We are #1 in both Paperback and Kindle. Yay! The list is updated every few hours, and maybe our rank will reduce over time, but let’s celebrate the moment. 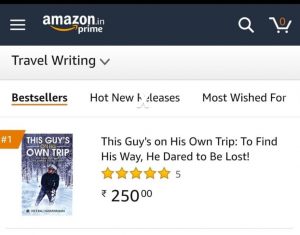 July 31
The book released today! The happiest day in 2020. So excited!!!
We sold over 250 books in paperback and Kindle combined on day 1. Woohoo! 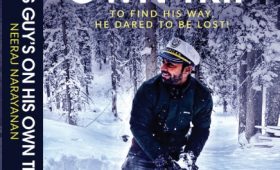 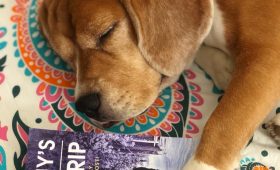