Have you ever imagined yourself being on a sailing ship,  riding rough waters, murderous storms, hit by gales day after day, braving and enduring it all, and finally seeing new land after months? Have you imagined jumping off the boat in your soaked clothes that cling tightly to your body, your hair scrambled all over your forehead; standing on the beach and the waves lapping gently at your soles, while a few members of a native tribe stares at you? Have you ever fantasized about discovering a land not known to man before?

It is 2015, and a crew is on a journey to one of the least visited islands on the planet – Zavodovski Island. It’s home to the largest penguin colony in the world, around 1.5 million of them live here.

Why is it visited so less?

It is surrounded by some of the roughest seas in the planet. The island itself is an active volcano. The closest piece of inhabited land lies 550 kilometres away – South Georgia Island, and even there only thirty people live, none of whom are permanent. They are all scientific researchers. The nearest land with a sizeable thriving population is the Falkland Islands –  2200 kilometres away.

The crew has been meticulously planning for 18 months on how to go to this remote land , and yet they are nervous. They have requested Jerome Poncet, who has previously been to Zavadovski Island six times, to come out of retirement and captain their ship – Golden Fleece. There are eight people on the boat including Jerome and two boat staff.

It is early January. While the rest of the world is still shaking off the festive spirit, the Golden Fleece is bobbing and motoring its way through the cold Antarctic waters. The mood could be sombre, but they are a spirited and driven bunch. Occasionally, they spot a nonchalant Orca Whale in the open waters and photograph it.

After seven days, they finally spot the island. Each person has a knot in their stomach. How must it feel to have seen pictures of an isolated island a thousand kilometres away from any civilization, keep looking at the little blob over a map in your home for months, spent weeks of sleepless nights worrying about the deadly ocean and wonder if the journey is worth all the risk, and then eighteen months later, see the island emerge out of the ocean in front of you?

The worst hasn’t come yet. The boat must find a way to get the crew on the island. There is no beach, no sign of any flat landing spot.

Zavodovski Island is surrounded by tall cliffs on all sides, some as large as ten metres (thirty feet). On a regular day, the waves can fly as high as fifteen metres when they crash against the rocks. The boat finds a spot where the rocks aren’t very steep and luckily the sea gives them fair passage to float nearby. Swiftly they start unloading their equipment. It takes all day. Five people get off. One slips on a rock, but his fall is broken by two others who grab him at the elbow and steady him. Jerome and his two men speed back in their lifeboat to the larger vessel and will set anchor nearby in case of emergency.

National Geographic History’s team of five have landed on Zavodovski Island. They are here to film life on this magical island for Planet Earth 2’s pilot episode. They clamber up the wet slippery rocks with the equipment, and set up tents not far away.

They walk a little ahead, over rocks on relatively flat land, and the most surreal sight unfolds. 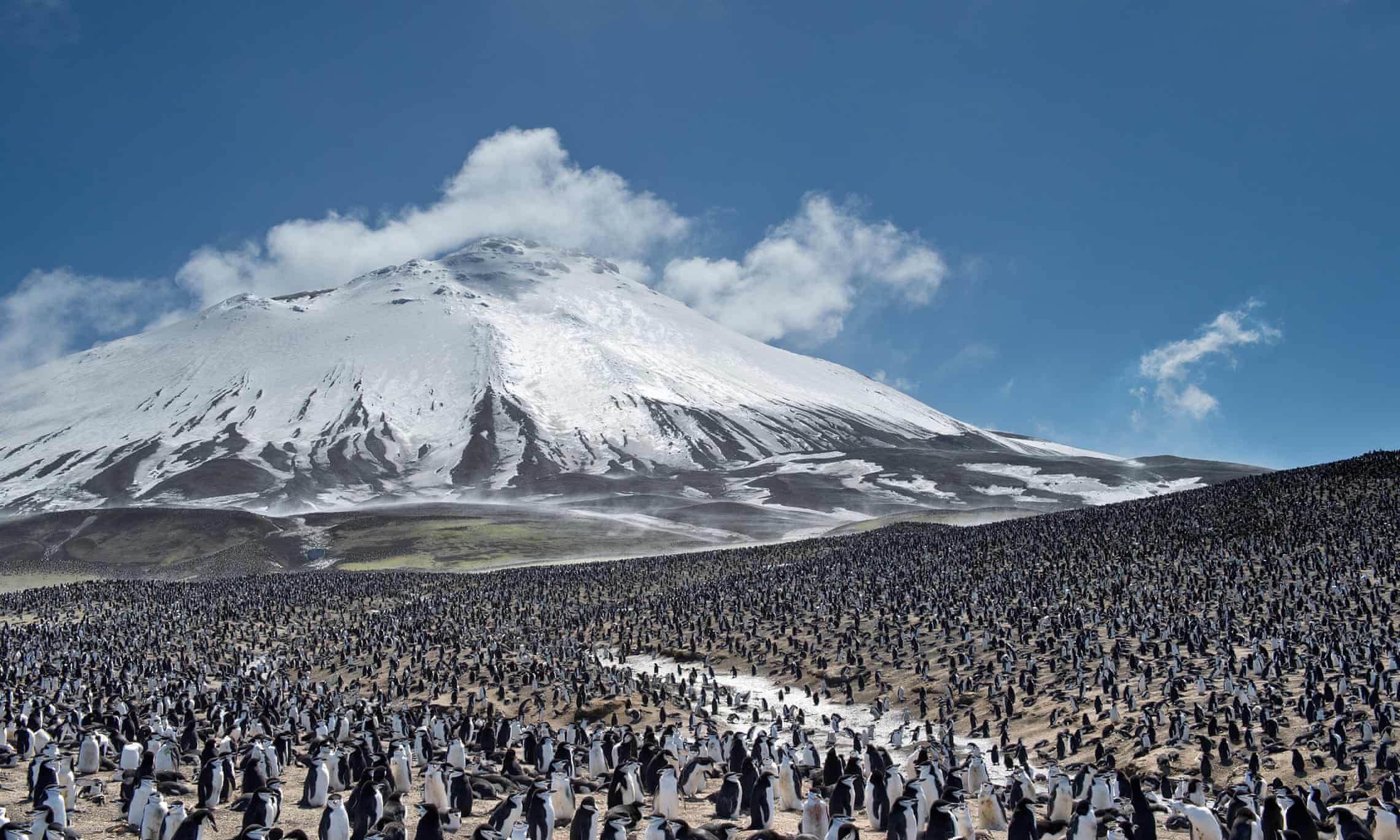 The crew are ecstatic. The fear of whether they would be able to land, has now given way to happy tears. They will be living and filming here for the next two weeks – only the second time ever that the island will see filming on its land.

The penguins aren’t scared. Many animals endemic to isolated islands don’t show signs of fear when they come across a foreign specie. It’s also the reason why so many species that live on islands become extinct when outside species invade their land. But the penguins are naive. They waddle over with their small stout pink webbed feet, close to the humans to inspect them. The white chest and underbelly is fluffy and one would be tempted to give them a nice rubdown, but sensibly the crew doesn’t touch them. Over the next few days, often the penguins walk by the set up tents and mark their hospitality by pooping all over them. Often, the crew hears a ‘splat’ on their tent in the middle of the night, and they just scrunch up their noses and roll over in their sleeping bags. Their equipment cases, resting outside, have huge blotches of penguin poop daily.

The Chinstrap penguins are beautiful. A black band running from head to under their chin, gives the impression of wearing a black helmet. Hence the name. Late November, they go into breeding season and this January the eggs have already hatched, and the chicks are nestling close to their parents. Most Chinstrap penguins can be assumed to be loyal, and a whopping 82% mate with the same partner all their lives.

The toughest job in the world?

The penguins don’t have it easy. The chicks are growing and need food. The adults have to go fishing to take care of the family. Thousands of daddy penguins waddle to the cliffs, and go down the rocks. Some of them jump into the ocean, while others slip and fall down the wet stones. The huge waves engulf them and take them in all directions. Bravely, they swim with the currents and sometimes against it. They will be gone for hours.

The mother, is still standing close to her kids, in the massive colony. Skuas  (predatory birds) are hovering low in the sky, waiting for a chance to pick up a baby penguin and eat it. A few of them are brave enough to fly down and land and stand near the mother and her kids. The mother screams angrily at them, hoping they will fly away in fear. In the wild, survival is a daily and only pursuit, and it’s each animal for itself. The kids snuggle close to their mom, waiting for daddy to be back with some tasty fish.

The daddy penguins have gone deep into sea, many times as far as fifty miles. By evening, they start coming back. This journey is even more perilous especially when they get closer to the island. As the sea get more ferocious and the penguins get closer to land, the waves batter them mercilessly to the rocks. Several penguins hit the rocks so hard that they are catapulted several feet into the air after ricocheting, and fall back into the cold, hissing water. Again and again they crash against the rocks, and some get injured griveously, while others die. As the crew filmed the scene, often they had a lump in their throat and tears as they saw penguin after penguin smashed against the cliff.

Their limbs are strong though. Most of them manage to get a grip on the rocks when they are swept onto them. As hundreds, thousands hit the rocks, they clamber over the boulders desperately before another wave can topple them into the sea again. Some perish.

The ones that make it back to flat land, now have to walk a couple of miles to the colony. With the food stored inside, they become heavier. Injured, tired, exhausted, daddy penguin walks to the colony. The kids are almost starving by now, and are making imploring sounds to the mother, who has had her hands full taking care of them, and shooing away the Skuas. She is surrounded by 700,000 penguins but she is waiting for only one.

Daddy reaches the colony, but his task is not yet over. Among these 700,000 penguins, he must find his partner and kids. He waddles around, inspecting all of them. Some of the returning ones are bloodied by their efforts, and the soft white fur is now coated red. The mother keeps making a distinct sound for her partner to hear and follow, but often it gets lost in the cacophony. They are all doing the same thing.

But she does not relent. She keeps raising her head, her beak and calls out. Eventually the father reaches. The kids are very hungry and he opens his beak for them. With their little beaks, they push into his mouth to grab the food. She eats after them. Once they are full, it is going to be her turn next to go to the ocean.

This happens every day. Thousand of penguins going into the roughest ocean in the world, some eaten by by leopard seals, some eaten up by killer whales, some battered against rocks, all for some food they set out to find.

The crew films everything for 17 days. Eleven of these days are lost to rain and snow. But the experience has been overwhelming. The rugged landscape, the constant stench of sulphur due to the volcano, the waddling penguins and their total absence of fear around humans, the march for food and death of these gentle beautiful creatures, and the absolute lack of any internet, civilization, spellbinds these five men and women.

They do not know then, that the episode “Islands” on Planet Earth 2 will soon become iconic, and the show will be recognized as the “best nature show on TV”. Four years later, I watch the show and can’t sleep all night.

It is but sweet irony that the most desolate island in the world, who’s outer being expels everyone who tries to enter, through its oceans and cliffs and intimidating volcano, can be home to 1.5 million penguins, skuas, albatrosses. It is home to so much life thriving. It’s just 14 square kilometres in area, but maybe no 14 square kilometres in the world have so many animals living there.

I pore over the map and look at South Georgia island and Zavodovski island, sometimes happily, sometimes wistfully. I read every interview, every article I can place my hands on, and chatter about it excitedly with my friend all night.

My heart has been captured.

The island does not care. It keeps billowing smoke out of its crater. The waves keep dashing against the rocks. The penguins keep waddling.

P.s Guys, if you haven’t watched it yet, watch this story on Planet Earth II (Episide 1: Islands) streaming on Amazon Primevideo.