It’s a blisteringly cold day in Moscow. The five men 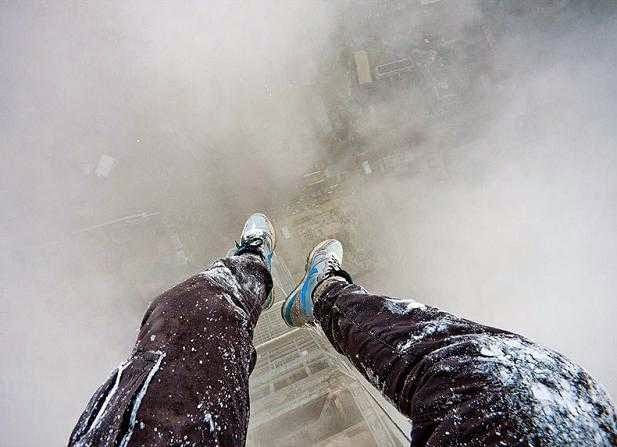 have been standing behind the building for two hours now.

From time to time, one man steps up to click a picture. Decembers are cold in Russia and not many people are on the streets. Nobody notices this group. The building, Mercury City, is an imposing structure. It must be, for once its construction is complete, it shall be known as the tallest building in Europe.

Later, they are deep in discussion. It will be tough to enter the building. It has a multi-level security system. There are cameras and motion detectors on every floor and security guards man the building twenty four hours.

“The biggest hurdle is to avoid being seen by the construction workers.”

The workers here are as good as any security team. If they catch anyone entering the premises illegally, they will beat them to pulp.

The group has been watching the building for weeks, mapping the cameras’ blind spots, working out the guards’ walking paths.

The still unfinished Mercury City office is about 1100 feet high but that’s not all that Vitaliy Raskalov and his group are aiming to ascend. What they want to scale is the wobbling apex of the building’s spire – the top of a construction crane rising high from the roof, 1214 feet from the earth. It is called Skywalking – the pursuit of scaling high structures without any proper safety equipment.

So far does the crane jut into the atmosphere, that halfway up, it’s shrouded in the clouds and covered with ice. At this height, the winds are powerful enough to blow a man away.

The next day, the group is ready to conquer Europe’s tallest building. They will enter at 1130 am, during the guards’ switch over. They have exactly five minutes to steal themselves in, before a new set of workers come in.

They enter as construction workers, hide and steal their way up. By the time they reach the base of the crane, two men decide to pull out of the last climb and instead base jump off the building. Vitaliy, Alexander and a third accomplice keep climbing. The ice on the crane stings their hands, the wind bites into their faces and tries its hardest to dislodge them and throw them to certain death.
These adventurers’ objective is not just to scale the building without using safety equipment. They are also to click photographs from such terrifying angles that would send shivers down the spines of anyone looking at these snaps. Or make us marvel.

They reach the summit. From the top, all that Vitaliy can see below are clouds and the ice caked crane. The wind is whistling in his ear, and he can’t make sense of his friends screaming. He grips on to the crane tightly with one hand and pumps the other fist.

This isn’t the first or the last building that Vitaliy Raskalov and Alexander Remnev will scale in this outrageous manner. These two fellows have already clicked photographs standing on a precarious plank on the top of the Russian Academy of Sciences; and scaled a turret on top of the Kiev railway station, again to capture mind-blowing panoramic shots. The police caught them earlier for climbing the 1,000-foot-high Russky Island Bridge. 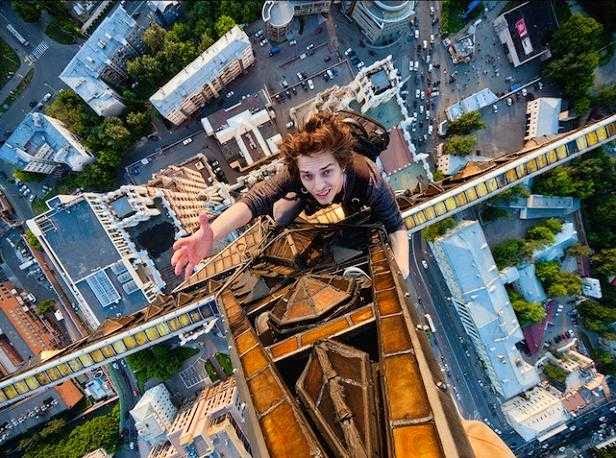 Skywalking has become a fad, a rage in Russia and more and more young men and women are trying this extremely dangerous sport, pushing themselves to scale terrifyingly high and steep buildings, without much advance thought to the possible consequences. The question is, should such a sport exist? Should we celebrate the achievements of a Vitaliy and an Alexander, men who take fantastic photographs from unbelievable angles but put their lives in danger to do so. Should we celebrate these brave men knowing that doing so might make them mini celebrities and an example for others to follow. To risk their lives. Even if only one person dies trying to do what Vitaliy has done, could his or her family ever recover from such a loss. Alternatively, should we condemn Vitaliy for breaking the law and rules, for being a misfit, for putting others’ life at stake besides his own. It is difficult to take a side. Hard to criticize him when what he does is so aesthetically pleasing. Make no mistake, the world will always love a misfit, love the reckless, love one who will not care for his life to pursue something that is beautiful. So what should we do? The point is, that the world needs a Vitaliy Raskalov, and an Alexander Remenov. The world needs mavericks as much as it needs sensible and practical men. It needs an adventurer as much as it needs a engineer. It needs a Michael Angelo as much as it needs an Einstein, a Sherlock as much as a Madam Curie. We do need a Don Quixote in pursuit of his ladylove Dulcinea. The world needs its Robin Hood. 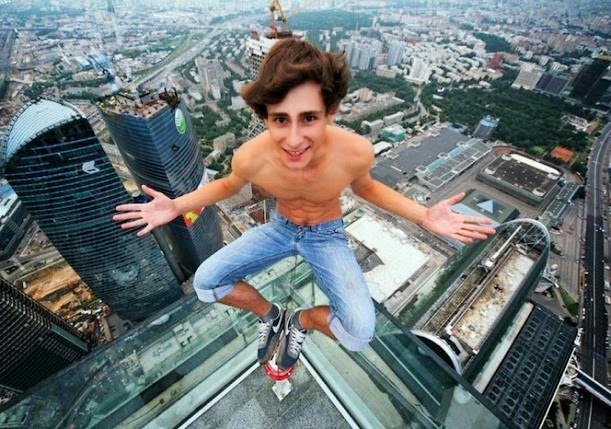 With his photographs, Vitaliy brings sport and art together. He might be breaking laws, but he is also a genius. He might be causing a lot of people unrest, but he is doing what very few men or women have the courage to attempt. This man has the power to make us gasp, overwhelmingly so, and that quality is rare. We live in a relatively boring age. The age of discovery and exploration have long left us. Scott, Shackleton, Hillary, those courageous men who stepped into the unknown, travelled over sea for months at a stretch, trudged on ice through storms, risked their lives, and helped mankind chart new borders in science and geography have now become chapters of history. We live in a century where we spend more time on a computer than being out there.  Vitaliy goes beyond all that and more. This Guy’s Definitely On His Own Trip. A few months back, Vitaliy Raskalov and Alexander Remenov waited for visiting hours to be over before climbing the Great Pyramids of Giza and after a short spell of taking in the magnificent surroundings, they took some spectacular photographs. Of course we should be furious, for it is a world heritage monument, possibly the most famous in the world, and it deserves a little more respect.Tutankhamen might not mind it too much though.  Enjoy the images. 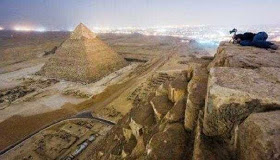 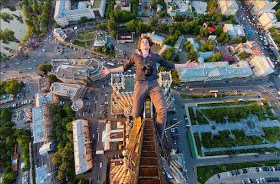 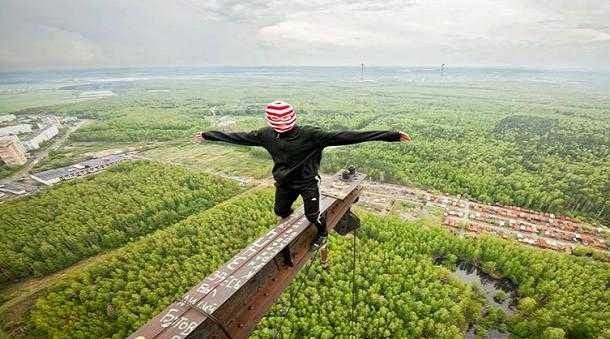 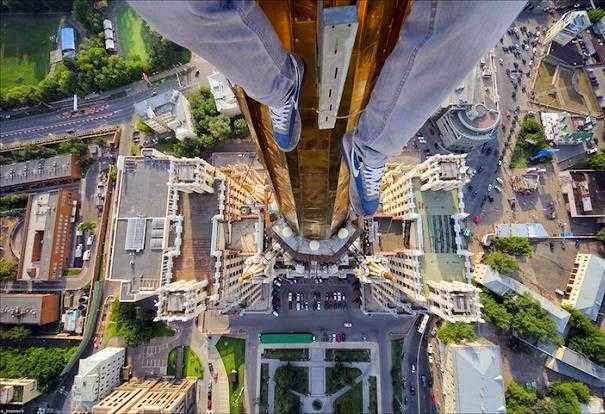 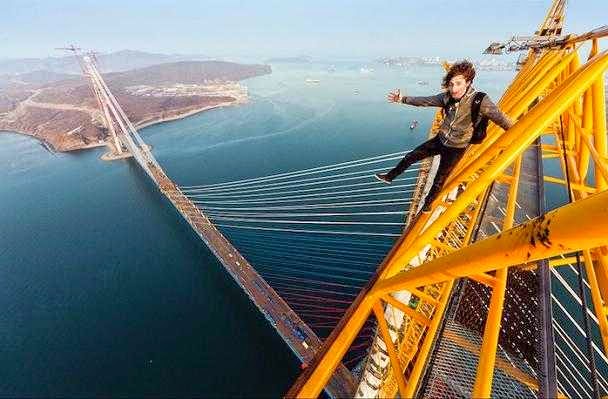