It was a beautiful morning in Dehradun. You know the kind where you want to go out for a long walk. I looked at my bicycle and it stared back sadly as if asking me to take it out. We both knew it wasn’t possible. We were still in a lockdown. So to distract myself, I started browsing the internet about people who have cycled extensively through the rough terrains, who have travelled across countries, and have many achievements and records under their belt. I was happily reading and daydreaming about travelling when a particular name caught my attention. Call me biased but there was an Indian name standing out in the list of achievers – Vedangi Kulkarni.

In December 2018, Vedangi Kulkarni became the youngest woman to have circumnavigated the world on bicycle. Vedangi was 19 when she started the journey, and 20 when she finished, celebrating her 20th birthday on the road. She cycled for 159 days in 14 countries to cover 29000 km. In doing so, she also became the fastest Asian to complete this adventure.

I wanted to know more about Vedangi, about this young girl who went paddling around the world. I wanted to know what motivated her, her thought process, the enthralling journey she had taken. And more than anything I wanted people to know about Vedangi. So I invited her for an Insta live session and few days later, she was telling her story to an audience that looked in awe.

Since she was a kid, Vedangi loved the outdoors. She travelled a lot with her parents. From mountains to oceans, the beautiful world intrigued her. At school she played many sports, football being her favourite. Cycle was only used for commuting though and there was nothing special about it. Not until her trip to Manali where she saw few cyclists who were travelling to Ladakh. The thought of cycling in the Himalayas was exciting. So once she was back in Pune (her hometown), she told her parents how she would love to achieve this feat. Let me tell you she was only 17 at that time. Are you surprised? Then you’ll be more surprised to know how her parents reacted. Instead of rubbishing her thoughts as a child’s fantasy, they travelled to Ladakh with her. Vedangi would cycle through the rocky terrains while her parents drove at a safe distance. They supported her and made sure that all of her dreams come true. Our society needs more people like Vedangi’s parents who cheer for their children. And instead of telling them what to do or worrying about “log kya kahenge”, they become the wind beneath their wings so their kids fly high. Sky should never be the limit!

Coming back to Vedangi, I asked her how she decided to cycle around the globe. It started when she went to UK for studying. She didn’t know anyone there and the little explorer our girl is, how could she refrain herself from experiencing the culture. She decided to take part in a cycling event and to practice she went on a 400 km ride. Her cycle broke down on the way where she met a lovely family that helped her. While talking to them, she shared her stories from Ladakh and they were amazed. They encouraged her to cycle across the country and as Vedangi couldn’t say no to an adventure, she set on for the journey with a map which she borrowed from her hosts. Needless to say, she completed the journey and travelled 1400 km. It was in Scotland that she realized how much she loved riding her bike. And that’s when the idea of travelling the world came to her mind. Thus began the process of bringing this dream into reality. She underwent an extensive training plan for almost two years while finding sponsors to raise money and securing the necessary visas.

As we continue speaking, she told me about the countries she visited. She had a world map in front of her and she traced the route with her fingers. In July 2018 starting off from Perth, she cycled across Australian outback and moved to New Zealand where she cycled the entire country north to south. In Canada she continued her journey from Vancouver till Hallifex. Europe was next in the list where she cycled through Iceland, Portugal, Spain, France, Belgium, Germany, Denmark, Sweden and Finland. It was December when she entered Russia cycling in temperatures which sometimes reached -20 degrees. The last leg of her journey was in India from where she flew to Perth to complete the record.

Vedangi travelled solo for majority of this journey. Except for India where she was accompanied by her parents and a friend, she was on her own for rest of the route. And as if this was not enough, she decided not to stay in hotels thus carrying everything on her cycle. Her luggage comprised of cycle tools, camping equipment and essential clothing. She ate at gas stations and slept in some weird places. She slept in pipelines, by the roadside, behind gas stations and sometimes even in the toilets. “Comfort was not a priority” she says. The aim was to give maximum time to riding. And as she was telling this, we the audience wondered if we could do the same. Can we venture out like her and trust the whole world to take care of us? Would you? 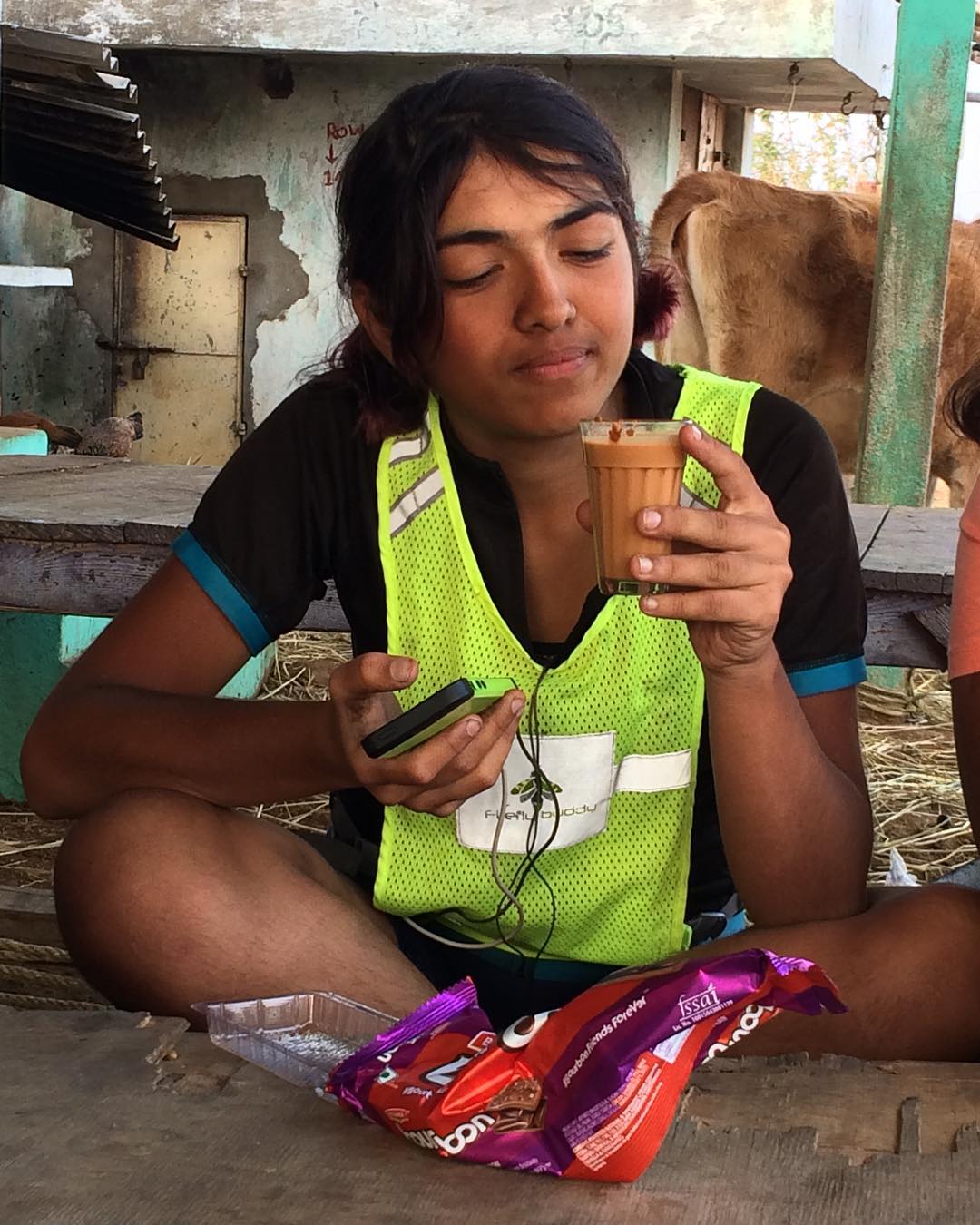 She had her own set of adventures on the road —some harrowing and some really exciting and all of them made for crazy stories. In Canada, she was chased by a grizzly bear. While most of us would describe the experience frightening, Vedangi on the other hand found it fascinating. How incredibly lucky to be able to see a bear family in the wild! Bilkul. We think you are lucky you were faster than the bear; otherwise it would have been a ‘beary’ big problem. Jokes aside, I loved the gleam in her eyes when she was narrating the incident. The excitement made us believe that this actually was an amazing experience. Thinking of going in search of a bear? Make sure you cycle like Vedangi.

She was robbed at a knife-point in Spain. When asked what was going through her mind, she said that she wanted to keep the fear away so she focused on memorizing the number plate of the muggers’ motorbike while they went through her stuff. They later threw her in a ditch where she hit her head and was unconscious for 3-4 hours. She had a concussion and was hospitalized for few days. People around her were concerned for her safety. Her parents were worried and wanted her to ask the Embassy for protection. But Vedangi wanted none of this. She just wanted to ride her cycle and complete the journey she had embarked on. So she started paddling again but not before she told the police that one of the muggers looked like ‘Bollywood actor Akshay Kumar’.

You can tell more about the person by what they say about others and how they look at the world. Vedangi is a ball of positivity. And when I asked her about her favourite memory from the trip, instead of talking about the hardships she faced or gloating about her achievements she narrated a story of kindness. It was peak traffic time in Russia when our girl decided to sleep for few hours. She was getting comfortable in her sleeping bag when she heard loud screeching of brakes. She peeked out and saw a truck parked next to her. A Russian man came out who was surprised to see this young girl sleeping by the roadside. He offered her a cup of tea and invited her inside the truck. They didn’t speak the same language and used Google translator to converse. I find it extremely endearing that two people who had just met were finding ways to connect and talk. The man later told Vedangi that she could sleep inside his truck and he would come back in a couple of hours. That day, she slept like a baby in a heated place and the kindness the man showed towards her made it her favourite memory from the trip. When you hear stories like this, you realize how wonderful our world is. You just need to have faith and the universe will take care of you. 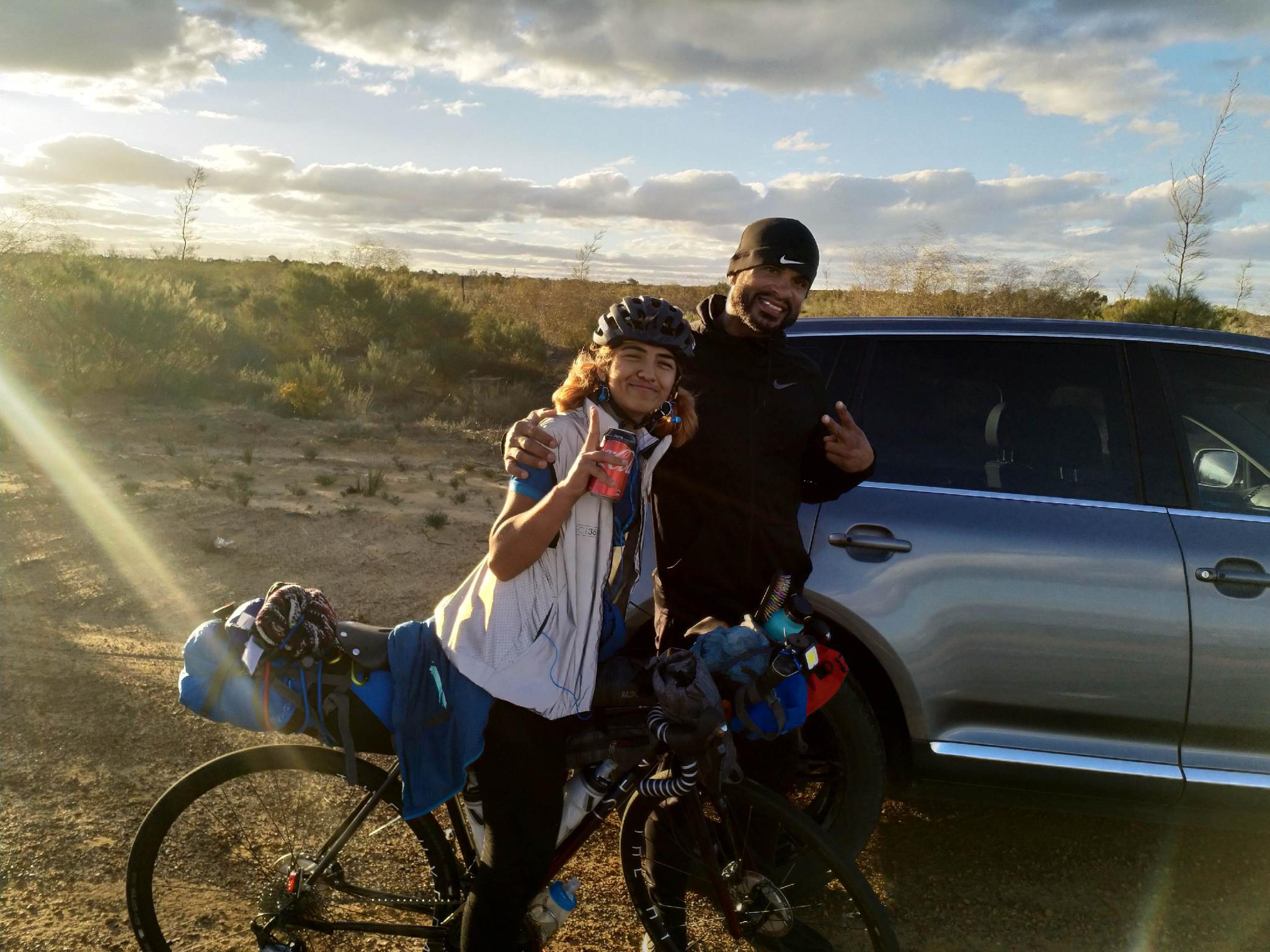 Lastly I asked Vedangi for a message she would give to people who want to explore the world, to the young girls who just like her have a lot of dreams but are scared of venturing out. With the dimpled smile that was a constant on this Insta live, she said how everyone has the ability to achieve their goals if they believe in themselves and work for it. Before she started the journey, not everyone believed in her. People commented on how she won’t be able to complete it. She was told that she was too young and a girl, and that this adventure jazz is for the white people. She blocked out all the negative comments and this is what she tells everyone too. The only person that needs to believe in you is ‘Only You’. The world can say anything but if you truly want to do something, you’ll do it. Just strive for it.

Vedangi is not just a record holder, she is a true traveler in every aspect and that is what sets her aside. She is not afraid to trust the world which is a rare quality to have. Even after getting mugged, not for a second she thought of quitting. For her, the world is a beautiful big place waiting to be embraced. I am glad that I could not go out for cycling on that beautiful morning. And instead I had a chance to talk to this precious girl who just wants to ride her cycle. Vedangi, I know there is so much more in store for you and I would love to read about some crazy stories from the road. A big ‘Grizzly’ bear hug to you!

You can watch my conversation with Vedangi here