Our next trip to Ladakh starts from September 18th. Click here for details.

It was August 2021. Our Ladakh trip was just about to end. We had seen snowfall at Khardung La. We had rafted in the cold water of Zanskar river. The sand dunes of Nubra were mesmerizing with their golden glow during sunsets. And what should I say about Pangong. It was dreamy like always. One night we slept outside our tents and saw so many shooting stars that we lost count. The trip had been perfect and maybe that’s why we didn’t want to leave. “Let’s extend. Let’s stay for 2 more days” said someone and that was exactly what we needed. Flights were rescheduled, offices were called and 8 of us were huddling together in a room to decide what should be done in these 2 days.

Let’s go to Aryan valley, I suggested. I was met with few nonplussed looks while few enthu cutlets shook their heads aggressively. Many of us don’t know about Aryan valley and the Brokpas that live there. Neeraj has written a blog on them and you can read it here.

The road till Darchik (the village we were staying at) is excellent, thanks to BRO. Indus accompanies you throughout and you will see it becoming narrower with some crazy rapids once you are close to Aryan Valley. The arid landscape of Ladakh also turns lush green. This time around it was the apricot season and we could see ripe yellow apricots everywhere. We crossed the villages of Dah, Hanu, and Gharkun to finally reach our homestay in Darchik. Darchik is nestled between the mountains and is as lush as it can be. The weather was quite pleasant and warm. Our homestay was at the start of the village and we unanimously agreed that it was one of the best views we got from any property we stayed in Ladakh. The windows opened to mountains right next to us and the stream below gurgled with full enthusiasm. It had a beautiful terrace which was later used for stargazing (and then sleeping). Seriously, how can someone stay in their room when the night sky is so beautiful.

If you have read about the Brokpas, you must know how they wear beautiful floral headgear and long flowing sheepskin coats. Don’t be surprised if you happen to visit the village and see everyone wearing regular clothes like you and me. Of course, they don’t wear those extravagant costumes in their daily lives. But you can see them in their full glory if you ask the locals to arrange for a cultural program, just like we did. Few men and women came wearing the Brokpa attire accompanied by the musicians (the head musician was 80 years old). Different tunes were played and the dance started. The men danced with fervour while the women followed gracefully and in a demure manner. Later when they made us try the headgear, we got to know how heavy it was. We couldn’t dance without adjusting it multiple times, let alone dance gracefully.

The first thing you will notice about the Brokpas is how pretty everyone is. They have sharp and prominent features and beautiful clear skin. Some of them have hazel eyes and blonde hair. And once you are done admiring everyone, you will realize that they are also very curious. We thought we were the visitors, but the entire village came to see us and to be honest it felt a little funny initially but later we were blown away with the hospitality of the people. 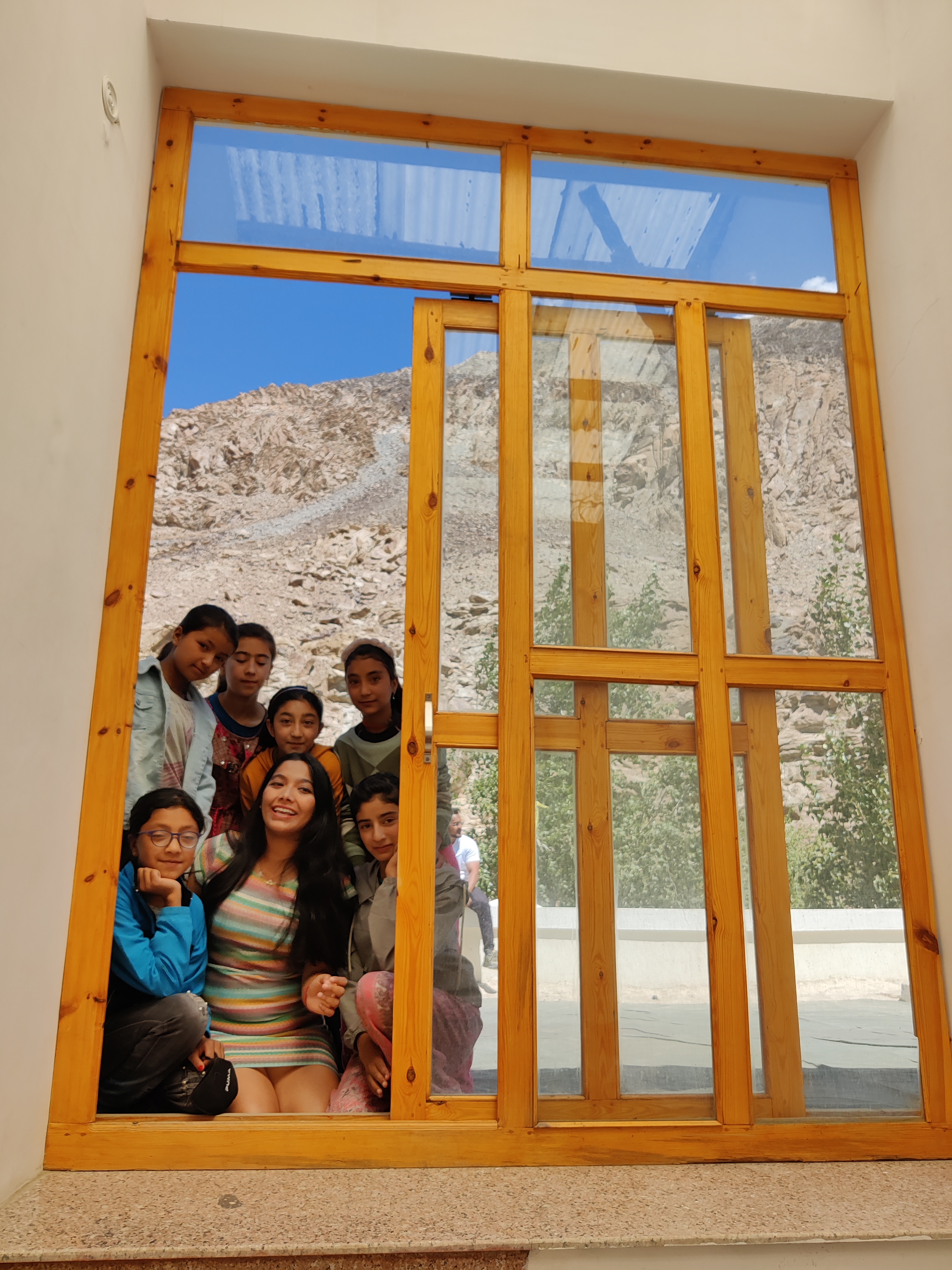 We spoke with the village kids who became our local guides and showed us around. The younger ones would run along giggling while the older kids made sure we were walking properly, some of them lending hands so that we don’t trip on the hilly terrain – such pure souls! We walked through buckwheat fields, through those apricot-laden trees. I started speaking to an old man who was carrying two heavy buckets filled with apricots and when insisted, he let us carry them to his house. We saw terraces where the apricots were strewn around to dry. They were later packed and sold.

We were a little surprised to see grapevines and later came to know that they also brew local wine in the village. Obviously, we tried the local wine which is quite pungent and to be honest, is an acquired taste. We were told stories about Brokpas and their Aryan ancestors. We were welcomed everywhere with broad smiles and a cup of tea.

We visited a small monastery that lies in the middle of the village. It was cute and colourful. The kids ran while spinning the big prayer wheel. We joined in too. There was a clearing in the middle of the village where wedding celebrations happen. The same place doubles up as a football ground for the kids. One of them shared her Instagram handle with me and asked me how many followers do I have. Another one told me about his visit to Srinagar and how he ate ice cream near Dal Lake.

We went to see the Brokpas of Aryan Valley. We found innocent kids playing around and happy smiling people busy in their daily chores. I don’t know how true are the stories of their Aryan ancestry. What I do know is that I visited a beautiful village that drips in culture and tells you many many stories from the past while living in the present day and age and progressing towards a better future.

Our next trip to Ladakh starts from September 18th. Click here for details.