The world, while abundantly beautiful, has its fair share of daunting or scary bits too. Who doesn’t have a phobia? I mean its only human for all of us to get a little perturbed by something. I for one fear snakes, eeeshh. And while you and I may not have an active fear of crocodiles, lets be honest me dearies, we aren’t plunging into a crocodile infested river anytime soon! Yet, that doesn’t change the fact that it leaves the mind mesmerized. So, here are 5 of the most dangerous crocodile infested rivers from across the world:

With over 300 crocodiles, Vishwamitri river passes through the inner parts of the city of Vadodara. This causes the problem of the crocodiles turning up in the unlikeliest of places, such as railway tracks, roadways, parks and even bathrooms. The area has unfortunately even witnessed a number of crocodile attacks as inhabitants use the rivers for their regular purposes. Moreover, as the monsoon season commences, while you and I are busy romancing rain with old music and a cup of chai, folks of Vadodara who are in proximity to this specific area become weary and hopefully watchful of these creatures. Narmada and Karjan rivers are also home to a number of crocodiles.

The infestation of crocodiles in the Nile is to such an extent that the Nile crocodile in itself is a type of the species now. The Nile crocodile has been described as a vicious man-eater, one that does not discriminate in the species that become its prey. Run ins with human beings have been so frequent that it has even been estimated that approximately 200 people may die annually at the mouths, I mean hands (ermmm), of these gruesome animals. They reportedly have 68 teeth and a height of 15 feet (in males). The Nile crocodile are also found in eSwatini and South Africa. And here you and I were busy thinking that the Nile is simply the longest river in the world!

The river has notoriously made it to the news on one too many occasions for crocodile attacks. However, in recent times carcasses of crocodiles have also been discovered on multiple occasions. The causal factor is believed to be the pollution of the river unfortunately which has led to the spread of diseases. Thus, authorities of the Kruger National Park have called for a closer monitoring and restriction on the pollution of the river which has previously issued warnings in the wake of finding remnants of humans as a result of brutal attacks.

Crocodile River, naam toh suna hoga! Sorry, Rahul, what I meant was that if the name itself has crocodile in it, what more is there for you and me to really wonder about, am I right? The river makes the southern border of the Kruger National Park. It is the first sighting of game reserve for travellers visiting the park. While crocodiles can be spotted at a decent distance, just a few years back there was news of a man not only getting attacked but also surviving a crocodile attack! Phew. Now I’ll take that good news. While the numbers have dropped, there still remains a presence of not just crocodiles but even mummified eggs.

The river is home to Cahill’s Crossing which has been named by many as the World’s Deadliest Crossing. Who wants to guess why this name came to be crowned upon it? Well, well, well, if it isn’t our darling crocodiles once again. Darling crocodiles? Scratch that, deadly crocodiles! A man was decapitated right in front of his friends. There have been other horrific incidents too. But the world is a place for all oddballs, so, the fact that this point presents an opportunity to spot as many as 40 crocodiles together (although it inhabits hundred) attracts number of tourists. They even get down from their vehicles and try to attract the attention of crocodiles, despite the aforementioned attacks or prevailing warnings. Erm, kya tum mei hai dum? I’m happy with Nat Geo, thank you very much! 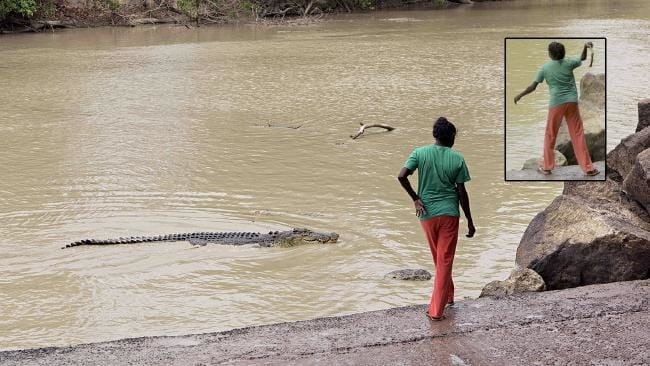 Needless to say, these are but a few of the crocodile infested rivers in the world. There are a lot many rivers, many of whom are also prone to attacks. And with this I remember how my friends and I would say, “See you later, alligator” and respond “In a while, crocodile!”