As I desperately tried to hold onto something, anything, to break my fall, only two thoughts crossed my head. One, if I was at the end of the heap, the bull would get me first. And two, could it really all end here? How the hell could my script go so wrong.

I turned to look, and the bull stared back at me…A day earlier, Pamplona transformed from the sleepy town that it is, to one of the most colourful places in the world, as it does every year on 6 July – the date of the opening of the week long San Fermin festival.

People walk all day long on the streets, singing songs and drinking as if there is no tomorrow. Although the opening ceremony was at noon, even at 9 am people were in the traditional red and white attire of the San Fermin, inspecting new things to buy, drinking Sangria, or just walking in the streets. As noon approached, everyone crowd ed in the town hall square. It was so jam packed that there was not an inch of space between two bodies. And then, at noon, Pamplona went crazy, just as it does this time of the month, every year. All around people started throwing Sangria at everyone, even at the people looking from the balconies above. Women were lifted off their feet and hoisted on the shoulders of their friends. Not just that, every time a girl was hoisted, she was egged on to remove her top.

Some of them did. And every time a girl did, the whole crowd cheered as one. Men tried to spray Sangria all over her naked body, some even tried to touch, but everyone laughed and clapped when she alighted from her pedestal, from her two moments of complete liberty. We shall not argue on the wisdom of the choice.

Some of them did not. When they didn´t, the crowd booed. But mark my words, all in good spirit. Everyone laughed, boy, girl, man and woman. It amazed me, that the whole performance did not feel lecherous at all. Here were men urging women to go topless, and whether they obliged or not, everyone laughed and cheered and hooted.

On the opening day of San Fermin, nobody sleeps in Pamplona. We all walked on the streets the whole day, drinking and laughing and spraying each other. When people passed out, they slept in the small grass beds next to the streets, or in the huge park. Pamplona’s San Fermin is an unusual festival, and also arguably one of the craziest festivals around. and yet, despite a hundred thousand people being in an inebriated state, there wasn’t one single instance of violence all day.

What i did not know then, as I sauntered happily through the street was that it was the very same route that we would have to take during the bull run. I wanted to do the bull run, on the very next day itself, day one. When I told that to Alberto, a cheery bearded Spanish lad of twenty something, he remained me of a few things that ten people already had.

One should avoid running on the first day, Sunday. It is the day when all the tourists want to run, and have no idea how to. Rule two, always sleep well on the night before the run. Rule three, do not be drunk before running. Rule four, no matter where you start, how fast you run, the bulls are faster. They will always overtake you. So don’t get in the way. Run on the sides.

So, I have no idea why at 7 am Sunday morning, first day of the Bull run, I made my way to the starting line. Maybe I did because I couldn’t find my friends. They had all left the dance floor long ago. Maybe because, I had just one more day in Pamplona and I wasn’t sure if I left it to Monday, I would one hundred percent complete it.

Or maybe, I wasn’t thinking at all. Maybe I like to worry in the moment and not before.

As I walked to the starting line, I thought about the rules. Rule one. Well, I would look out for the locals and follow their lead. Rule two. Hmm, my legs did feel quite tired. But it was only 800 metres, plus we would get a head start. Rule three. I wasn’t drunk, the last drink i had was maybe five hours back. Or was it four? Rule four. The sides it was going to be.

As we stood there, a number of work personnel came in their go- carts and cleared the road off all the plastic, the bottles, and every single object lying uncared for. Minutes later, the whole road was sprayed with water. Were they doing it to slow down the bulls? Wouldn’t we slip? As the clock ticked, the doubts increased. You have been up the whole night boy, dont do it when you are this tired. C’mon, it’s only eight hundred metres. I looked at the street. It was narrow, maybe twenty feet in width, or less. Some of that would be taken by the bulls. How would all of us run?

We all stood eight hundred metres from the finish line at 740 am.

The crowd had taken their positions long back. As early as 6 am, some people had gathered near the wooden barricades at the corner of the last bend, fifty metres from the finish line, and had hoisted themselves on top to get a grand view. In the streets of the race, people who lived there, were watching us from the balconies. And many of them had rented out their balconies to the tourists for viewing the race. People had paid upto 80 euros to view from the balconies. 80 euros for 2 minutes of viewing time.

All around me, runners were discussing their strategy. Some stretched themselves, some jumped, some just looked grim. Everyone was nervous.

A lady was announcing something in Spanish. I couldn’t bother about her. All I could think was for the race to begin. The minutes passed by miserably slowly. Also, there was no space to move, there were so many runners. And we couldn’t move ahead as the cops stood firmly in front of the first row of runners.
To egg ourselves on, we sang football songs. We jumped as we sang, and the people in the balconies joined in the singing.

As we moved forward, everyone in the balconies cheered. It felt good.

It all feels good till the first gun shot. That is when the screams begin. That is when you stop jogging, walking, and start running. And when the second gun shot is fired, everything then becomes a blur. 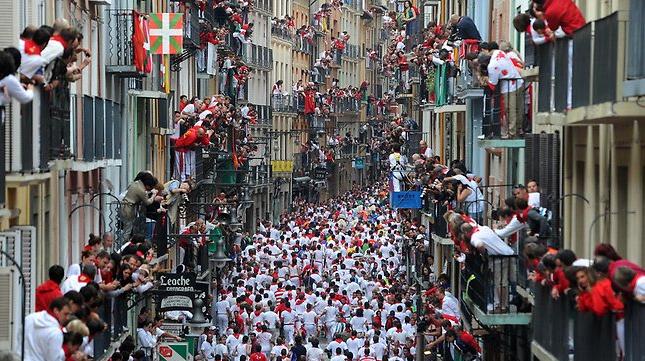 I waited for the second gun shot. A voice inside told me that all I needed to do was to run on the sides. The first people to see the bulls are those in the balconies, and they are the first to scream as well. Within moments, I could feel bodies push me from behind. Some of the runners had already started panicking.
There wasn’t time to look back to see who was pushing. There wasn’t time to do much. So, I ran in the centre of the street, and again changed course towards the inner side as fast as I could. The shouting intensified.

About two hundred metres from the end, the first bull passed me. It was huge. I don’t remember if it was the screams of the people or the sounds of the bull’s feet pounding the ground that made me notice it first. It was soon followed by two other bulls, and as we ran, our hearts raced faster than our legs. James had asked a friend to click our video as we ran, but once the race began, I can guarantee that no thought of picture, video, glory, celebration struck us at all. We were running for our lives, and maybe one can forgive the mind
to ignore trivial things like the camera then.

And then came the finish line, only thirty metres away. And that is when the last of the bulls decided to do what we never expected it would.

And then, it turned. Towards the crowd.

In a moment, all hell broke loose. Everyone started screaming. A few people standing on the sides, actually fell off the top of the barricades, but on the other side. It all happened so fast that I really do not know what happened. The next moment, I was heavily pushed from behind and I slammed into the guy in front. Man had, as usual, fallen prey to panic. Ahead one person tripped, and all the ones following fell like a pack of cards right behind him. As I saw the girl in front of me crumble, and her feet getting entangled with mine, I struck my arms desperately in the air hoping to find some support that would break my fall. As I stumbled, and willed myself to somehow stay on my feet, I could feel the beast right behind me. The next moment, my feet flew underneath me.

As I desperately tried to hold onto something, anything, to break my fall, only two thoughts struck me. One, if i was at the end if the heap, the bull would get me first. And two, could it really all end here? How had my script gone so wrong?

The next moment I lay flat at the end of the heap of people on the ground.

I turned to look, and the bull stood, only three metres away. I don’t think I was scared in those moments. All i felt was pure disbelief. It really couldn’t all end here. And honestly, the run hadn’t been too difficult. Hell, I wasn’t even tired. C’mon, not like this. Heh, in hindsight, I think I love how ridiculously biased my optimism is.

I looked at the bull, and it looked back at me. It might have been for a second, but in that case, it was probably a really long second, the longest second I have known. The next instant, it struck me that the bull really wasn’t moving and was just staying put. Somehow I pulled myself from the heap and stood up. Someone screamed, and I wonder if I should have stopped to check.

But I ran. And crossed. The finish line.

Later I was told, that the bulls usually don´t do anything if you are flat on the ground.

We were back to drinking in the evening, and dancing in the night. 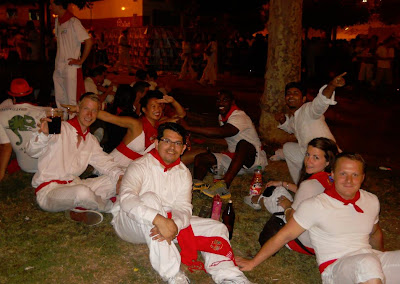