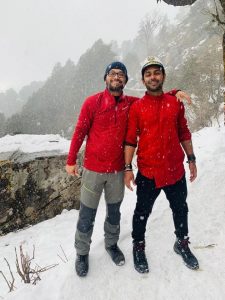 So statistics claim I have spent more time in 2019 with Rishabh Somani than with any other person. Wondering if that’s something I should cry about

I met Rishabh, when he joined me for my Munnar March trip. We didn’t really interact much those 2 days, but the trip was super fun. He then booked off Meghalaya & Nagaland, two back to back trips I was leading in April. In those 14 days, Rishabh dived into any work I gave him, ran with me on treks, swam better than me and together we helped people wade cross lagoons and rivers into surging waterfalls. He soon became my rap partner, and dance partner and we would rap every Punjabi song together in trip buses, on mountains, in hotel rooms. One afternoon when we had just come down from the #Dzokouvalley trek in Nagaland and I was having an emotional moment, I asked him to play a song. And he played every song I loved for the next half hour and sang them with me. Friendships are fostered best in smaller moments like these.

Going to Mumbai became a ritual for me, a first, and the gang would meet up daily. Every day Rishabh would be there. He came for all the weekend treks in Maharashtra in August and by now I was looking at him as someone in my team,not a tripper. I trust him blindly, and with everything. I’d ask him to take the front of the trek, while I took the ones at the far end.

This new years, we did Auli together. He was very nervous about the minus temperatures before the trip, but I knew he’d be alright. On Jan 2, snow fell in Chopta and he saw his first snowfall. We all had our weak moments there, and I saw my boy too tear up. A few minutes later the two of us were running madly on the road, skidding skiing on all the sleet deliberately playing our own games. We were like two ten year olds that day.

I have seen a lot of moments, places, emotions with Rishabh this year. Waterfalls, snow, cliffs, raging streams. In all he has been my right hand, my friend, my support, my brother. I have seen him help people unconditionally, I have seen him grow as a person, and I have seen him look happier.

Statistics claim I have spent more time in 2019 with Rishabh than with anyone else. And I am glad it was him.