When people talk about bucket lists, they often mention the ‘northern lights’, ‘Machu Picchu’, the Great Barrier Reef and more. I however have always been fascinated by places that seem far out of reach, and not too many people visit. These places that titillate my imagination mostly have an exotic species of animals, or craggy cliffs and lagoons. Basically, they scream of adventure.

A few years back, I saw a photograph. And from then, it’s been one of my fantasies to visit the fascinating Christmas Islands – a tropical island lying about 36 kms south of Indonesia (Java). Two thirds of this Island are national park, and the majestic rainforests, the crazy marine life, the stunning seascapes, and the large number of endangered species of animals on this island makes this Australian territory a haven for nature lovers.

Birdwatchers – Christmas Island is one of the world’s most magnificent sea bird breeding sites. Around 80,000 birds’ nest on this 135 sq. km area island every year, and you can see and hear birds just about any time of the day. But Christmas Island is most famous for something else – the unique red crabs and their spectacular annual migration from the rainforest to the sea. And it is that picture story, I shall be sharing with you.

Tens of millions of red crabs live on Christmas Island.  Every year when the wet season starts (between October and November) the adult red crabs embark on a remarkable migration from forest to the sea, to breed.

This natural ‘travel’ attracts visitors from all over the world. During the peak season, it’s possible to walk among thousands of crabs as they journey to the coast. 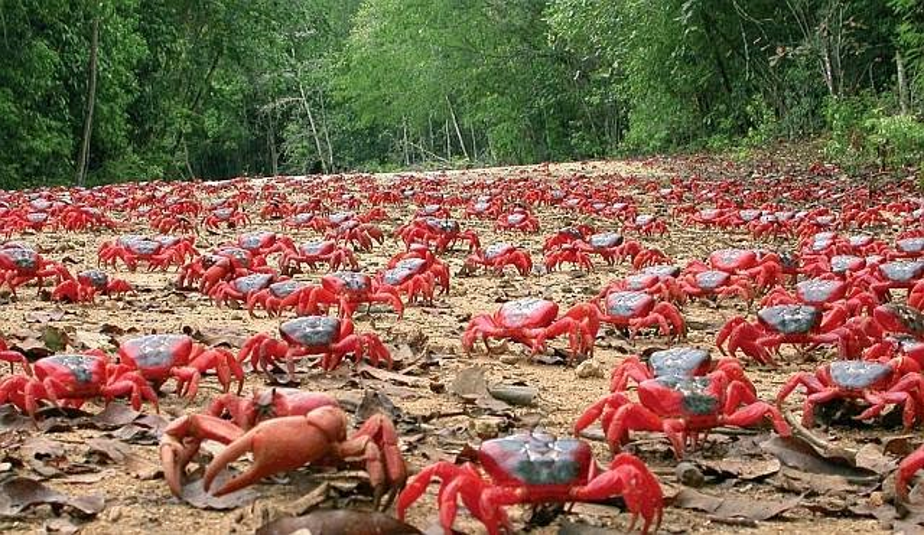 Unfortunately, many crabs also get killed (mostly accidentally) while crossing roads, human habitats etc. As a result, the island has come up with a series of plans that would help crabs cross safely.

The above picture is of an underground path with a partial rood, built for the red crabs to pass through.

The below picture is a “pavement” built only for the red crabs’ migration, so that they don’t get crushed under car tires. 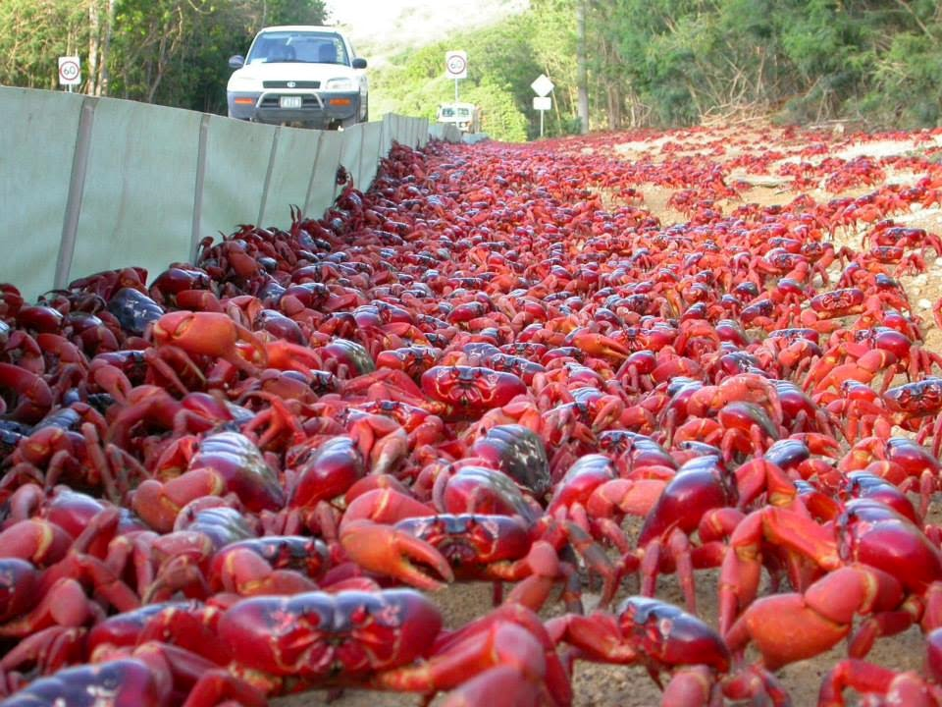 There are signboards all over the island, to inform and sensitize people about this species. 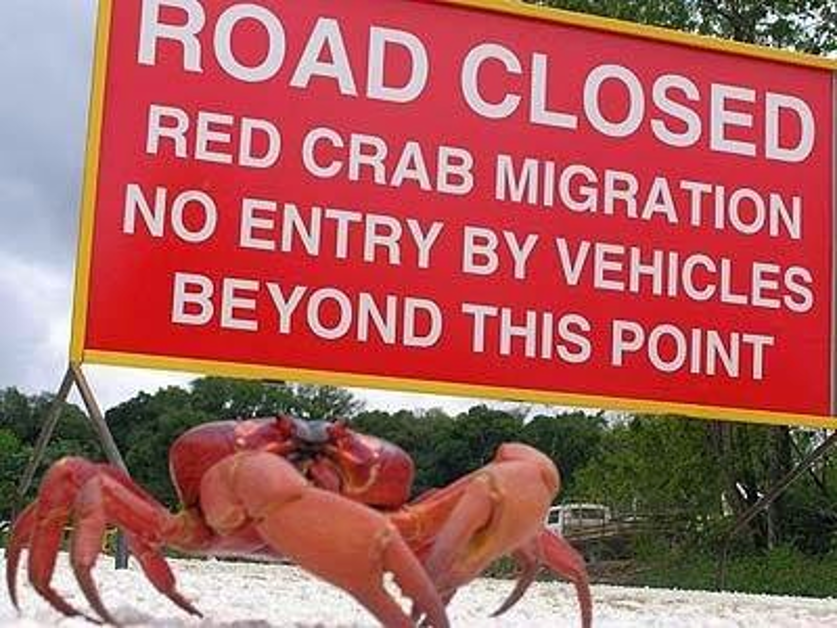 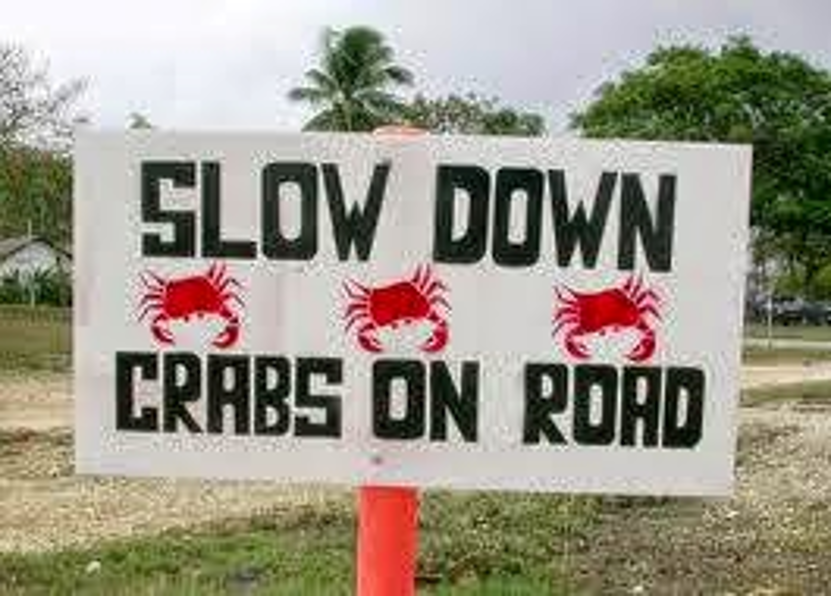 It is wonderful to see people care about other species on their land, and be willing and enthusiastic about going to difficult lengths to protect the species.

I love this picture of two girls on their bicycles, stopping, pedalling, stopping again, because they want to make sure they don’t hurt the crabs. 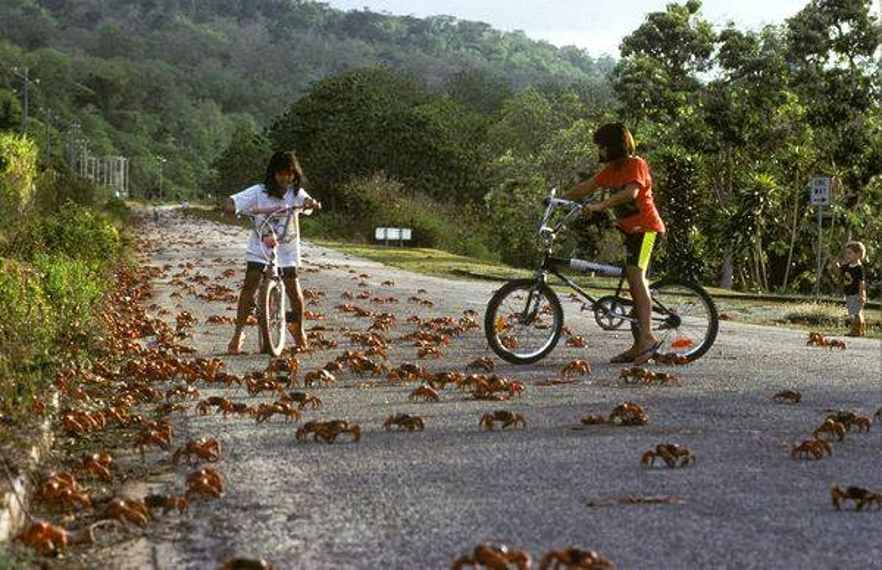 Once the crabs reach the coast, they start breeding. If you are lucky enough, you might even see some of the female crabs releasing the eggs. Some of the best spots to see the breeding is near the blowholes, along the southern coast of the island. Blowholes are holes in the ground where air and seawater are blown out due to waves crashing into caves in the bottom of the cliffs. Depending on wave conditions, the water and air trapped in the caves are forced out from the holes that are formed at the top of the cliff caves. This leads to spectacular plumes of water  being thrown up into the air. It is another attraction that Christmas Island is quite popular for.

So that’s a place I want to go to, people. If you can, do visit Christmas Island some day for its magnificent migration, the teeming wildlife, and the beautiful marine life. If you go, make sure

that you do not hurt the crabs at all.

Getting here:  You can fly into Christmas Island via Perth, Australia. There are 4 flights every week from Perth to this Island (Virgin Airlines). Fiji airways flies in from Fiji once a week. If you already have a visa to one of these two countries, you don’t need a separate visa for Christmas Island.

Leaving you with one of my favourite pictures of the island. 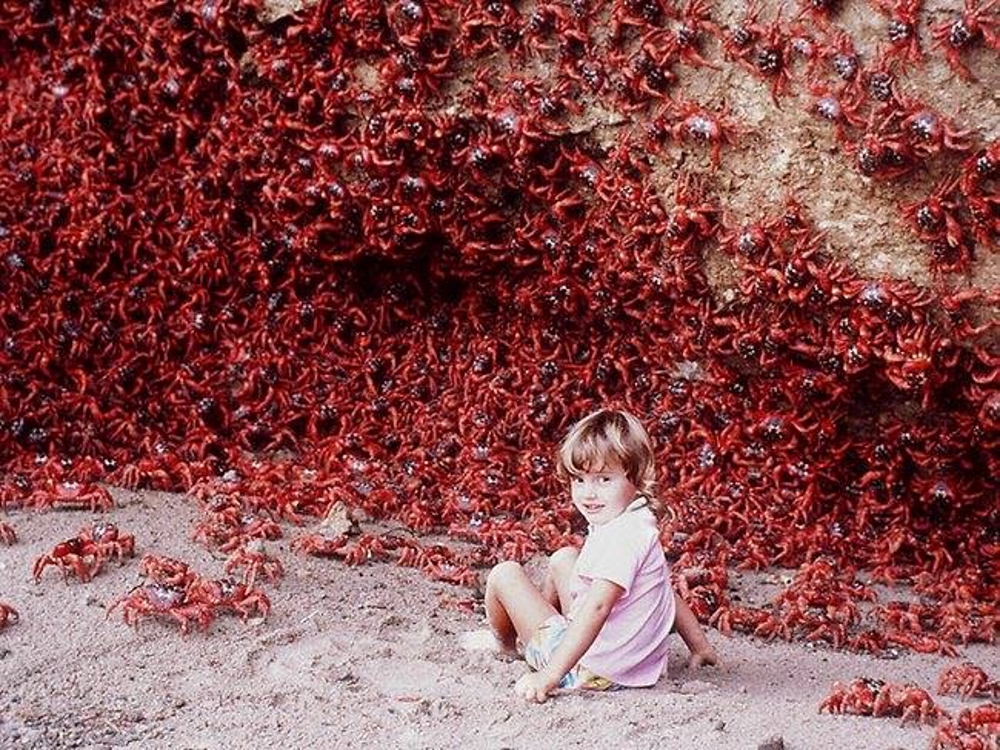