Slowly, a mist descends from the sky and surrounds the carriage. The horses run faster, not because their driver is pulling harder at the reins. They are as nervous as him. The carriage rattles along, kicking up dust and stones in its wake, hurtling through the only road in the forest. The traveller looks out of the window. All he can see are the dark trees. Up in the sky, the night predators circle slowly, ready to swoop down on any creature they see on land. But the animals don’t come out, not even the bigger ones, not even the bears. A lone wolf stands on top of a cliff jutting out from the mountains and looks on without blinking. He shines silver. Within minutes, evening has changed to a purple dusk. As the carriage turns on the curve, a shadow swoops down and shrouds the vehicle. The horses neigh loudly, rearing their heads in utter fright. “No no no!,” screams the traveller. It is pitch dark, and his cries go unheard in the forest.

It is the year 1485. A peasant boy in Wallachia (region adjacent to Transylvania) bursts into his home, and the family looks at him.

“Vlad…” he blurts, “I saw Vlad behind the hill.” The mother lets out an anguished cry.

Vlad III has been dead for nine years. He is posthumously titled Vlad Tepes. ‘Tepes’ in Romanian language means ‘Impaler’. Vlad the Impaler.

Welcome to the land of Dracula.

Sighisoara, Transylvania: It is 1431. There is festive celebration in the house of the Draculesti. Vlad II Dracul holds the newborn baby in his hands. Over centuries, there will be tales of this day, of holy statues dripping with blood, on the day when Vlad III was born. He has three other brothers – Mircea, Vlad Calugarul aka Vlad the Monk, and Radu the Handsome. 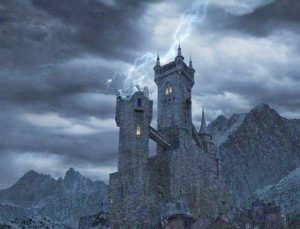 As a boy, Vlad was educated and  trained in warfare, geography, science and the languages. In 1447, the Hungarian Boyars rebelled against his father, Vlad Dracul, and killed him in the marshes near Balteni. Mircea, his elder brother, was  blinded and burnt alive immediately thereafter. All of sixteen, Vlad III now had to establish himself as a leader in Wallachia.

Vlad’s methods were brutal and terrible; there was blood smeared all over his crossbow, hands and soul. Anyone who dared to incur his wrath was killed violently. Thousands of people were dragged,  their hands tied to horses’ feet, dragged on the streets and then impaled on spikes built around the forests surrounding his castle. He and his men often galloped through the Carpathian mountains, burning down villages and razing fortresses. In fifteenth century Transylvania, the nights were long, burdened and cold.

In the 1400s also came the Crusades. The Ottaman armies from Turkey pressed into the East European countries.

The Turks sent two emissaries to Vlad’s court for talks.  He killed them by nailing their turbans to their heads, later saying that they did not raise their hats to accord him respect

The battles between the Turks and Vlad’s armies were bloody and the land around the Danube turned red with the number of bodies lying around it. In his letter to his ally, the king of Hungary, Vlad wrote,

“I have killed peasants men and women, old and young, who lived at Oblucitza and Novoselo, where the Danube flows into the sea, up to Rahova, from the lower Danube up to such places as Samovit and Ghighen. We killed 23,884 Turks without counting those whom we burned in homes or the Turks whose heads were cut by our soldiers…Thus, your highness, you must know that I have broken the peace with Sultan Memed.”

There are stories of Sultan Memed, the great Conqueror of Constantinople (now Istanbul) and expert in the art of psychological warfare, vomiting and turning back from Wallachia at the sight of 20,000 impaled corpses outside the capital.

Surprisingly, Vlad Tepes became seeped in Romanian history as a hero. Despite his cruelty, Transylvania respected him for always standing up to the Ottoman Turks. This is in star contrast to the remaining members of his family,  who were branded as evil doers, even likened to the Devil.

Vlad’s son, Mihnea Cel Rau (Mihnea the Wrong Doer), was as cruel as his father. Gavril Protul, an abbot and chronicler of the times described Mihnea thus, “As soon as Mihnea began to rule he at once abandoned his sheep’s clothing and plugged up his ears like an asp…. He took all the Boyars captive, worked them hard, cruelly confiscated their property, and even slept with their wives in their presence. He cut off the noses and lips of some, others he hanged, and still others drowned.”

In the December of 1476, reports were spread of Vlad Tepes’ assassination. His head was supposedly carried as a trophy to Constantinople, whereas the rest of his body was buried in a monastery at Comana (in Romania). 400 years later, Romanian historians declared that he was not buried at Comana but in a monastery at Snagov, near his family property. In 1933, when the tomb was excavated, all that was found in the tomb were remains of animals.

A few weeks after his supposed death, people claimed to have seen Vlad in the palace grounds, the forest, and in the hills. The rumours have still not ceased, not even 500 years after the incident.
Strangely, none of the male Dracul’s death dates have been recorded. This further spiked the rumors that the family was that of the Vampires. Half of their wives went mad, or committed suicide. In 1654, Prince Constatin Serban ordered that all the known Dracul graves be opened and though he never spoke of what was found, it is rumoured that there were dog bones inside. 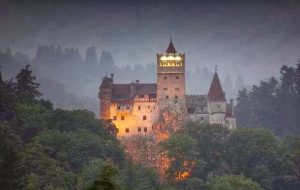 Years after all these princes died, it was said that they had been seen riding horses, and throwing garish parties in their palaces, reveling over the deceit of their death. Many men and woman who lived near the family property were said to have gone missing. The carcasses of animals were drained of their blood and were scattered all over the Vania and Bran surrounding forests. People started going mad, claiming they had seen ravishing women appear out of the misty night and suddenly disappear into thin air.

Even today, people are warned from entering the Bran forests. It is said that the forest is haunted by Dracul princes who are undead and roaming around in search of blood. Orthodox Romanian believers insist that one should cut off the legs of the deceased, for if the undead feast on the whole body, they get access to the deceased’s living family as well.

Vlad Tepes, Bran Castle, the stories of the unrecorded deaths, the bloodshed, the imposing Carpathian mountains, the bodies, the folklore, the tales, the fear, the lust for the supernatural, all became an inspiration for Bram Stoker to create his wonderful novel – Dracula. Oh why do we love the unknown, the mysterious, the unexplained so much.

What Bram Stoker did not realize when he wrote his novel was that it would become the most important reason for a remarkable leap in tourism for Transylvania and Romania. Romania is a beautiful country. It is full of medieval towns and fortresses and forests and hills. Yet, Transylvania gets the maximum number of international visitors. In the 20th century, visitors to Romania likened Bran Castle to the castle they had read about in the novel and in the 80s, restoration commenced in the badly maintained castle and a special ‘Dracula Room’ was inserted. Today Bran Castle has become a ‘must’ in any itinerary or traveller’s plans while visiting Romania. The country in itself received between 7 to 9 million people every year between 2008 and 2012, a large part of it because of Transylvania and the Dracula legend.

It’s funny, the man who killed thousands and thousands of people, hearing whose name people wanted to flee their homes, their country, their lives now could be the reason for a million people to visit the same land.

P.S. Oh by the way in October 2011, Prince Charles claimed he was a direct descendant of Vlad Tepes.