There is something special about ‘firsts’ no? First crush, first kiss, first job, first salary, first car, heh we do have fond memories around these things. In travel too, as trip leader, I get to hear and see trippers being excited about certain ‘firsts’ that might happen on the trip. There are so many people I have seen tear up when they see their first snowfall. Either they tear up, or they go mad like kids jumping around, throwing snow and snowballs in the air. When someone sees their first tiger in a safari, they sit with bated breath, wide eyed, their hearts beating fast, and the awe on their faces apparent.

But this story is about shooting stars. About a boy seeing his first shooting star. We were in Kashmir. Trekking. The previous afternoon we had reached Tarsar Lake. It had rained cats and dogs the whole evening and night. But tonight was different. The sky was clear. It was cold, and as we finished dinner and came out of the Mess Tent, we all huddled around each other in the meadow, marvelling at the night sky. A lot of us had seen shooting stars before. That’s when Sivaji announced he had never seen one. We joked that we’d make the universe conspire so that he would see one that night. The next five ten minutes we kept calling out to the sky, to the stars, to the universe in general. “Dikhado yaar shooting star”, we said laughingly, casually. Then one breezed across the sky. It was a small one, and only a few people saw it. Sivaji didn’t. We felt a stronger urge now – he had to see it. The calls to the universe increased. People kept praying that a shooting star falls.
Isn’t it strange that in a sky full of shining stars, we all wait for the one that flashes past for a second only to burn out. Isn’t it strange (synonym for strange: human) that we ignore the beauty that is in front just for the sake of sampling something different?
It became colder. We all stuck closer. People held hands, people shivered, people trembled. But we were happy. People put their hands into someone else’s jacket pockets, trying to get warmer. People hugged. All the time we kept staring at the stars, and prayed aloud. One shooting star. For Sivaji. Please. Please please.
And then it happened. Across the night sky, through a million silver stars, one shooting star flew past – a ball of fire in real – but appearing like a thin line of gold streaking from one side of the black sky to another. It came for a second, but it was so beautiful that all of us saw it, maybe in slow motion, for a few seconds in our head. And of course it disappeared in a second. What happened next? Pandemonium. Sivaji jumped in the air, like a child yelling “I saw it, I saw it”. I jumped in the air, and so did maybe ten others all screaming “Sivaji, shooting star, he saw, he saw, we saw”. Shrimayi, Sivaji, I were hugging and maybe a few others were wrapped around us too. In those brief moments, we all forgot the cold. We did remember it very soon though. But those moments, we were all kids because one boy saw his first shooting star.
He saw. Yay.
p.s This pic isnt of him or that star. That would be impossible to capture. Its just the night sky in Tarsar, and a boy and a girl staring at it. 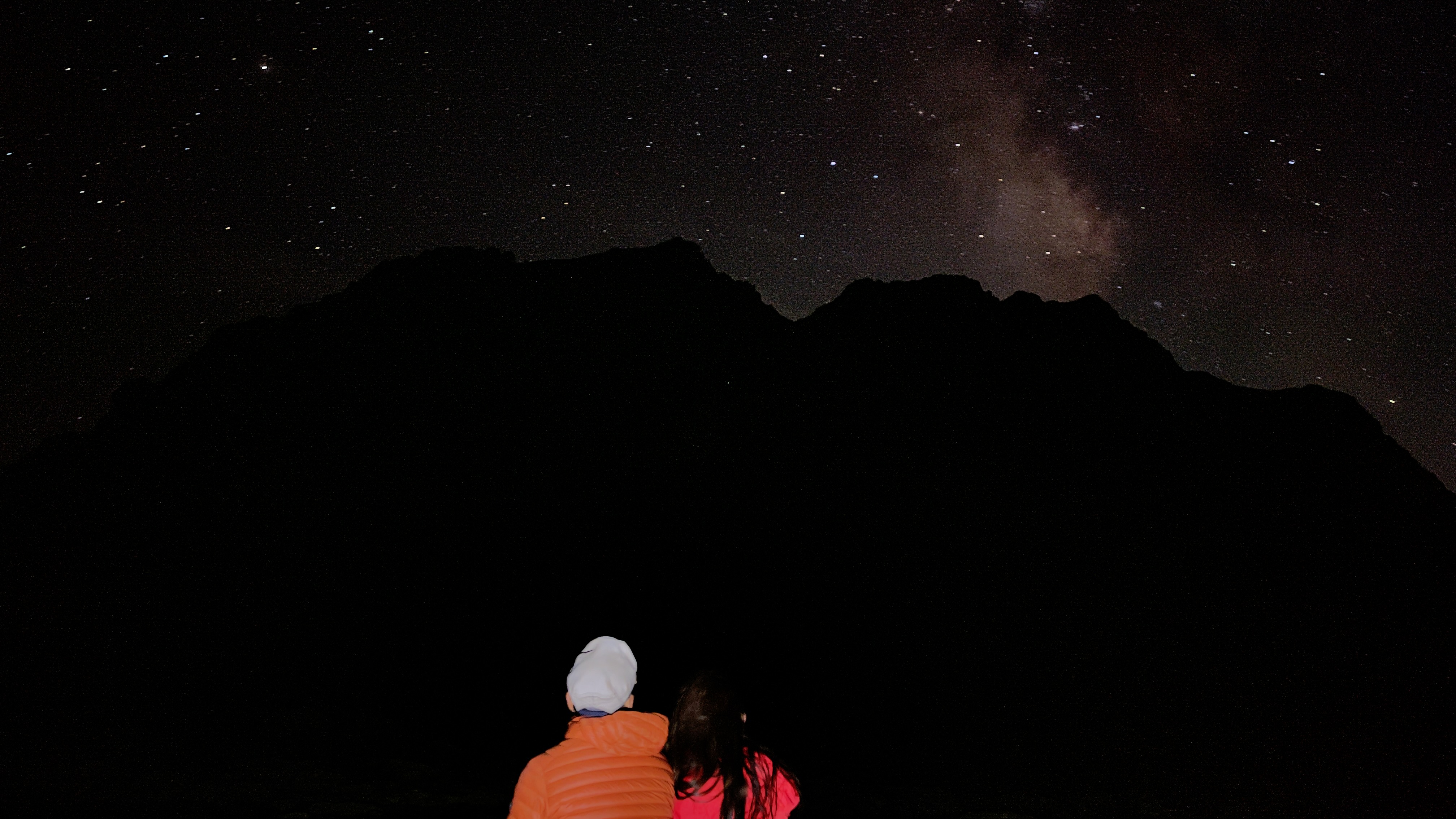