Macedonia is a small landlocked country located in the Balkan Peninsula, in Europe. It borders five neighboring countries. These are Kosovo and Serbia on the north, Bulgaria on the east, Greece on the south, and Albania on the west.

Not a lot of people have heard about Macedonia but it was once the greatest empire in the world. Here are some interesting facts about this beautiful mountainous country.

2. To add on to confusion of the real Macedonia Empire, it’s hard to conclude where Greece begins and North Macedonia ends. But we know the country is very old. The ancient kingdom of Macedon dates back to 808BC and Skopje, the capital city is said be around 7,000 years old.\

3. It is widely believed that some parts of the cross on which Jesus was crucified can be found in the foundations of the monasteries of St. Bogorodica Precista (Kicevo), St Georgji Pobedonosec (Debar) and St. Jovan Bigorski.

4. The country is home to the Ohrid Lake – the oldest and one of the deepest lakes (288 meters) in Europe. It is estimated to be around 4 million years old and has 200 endemic species that haven’t been found at any other place in the world. It was also declared a World Heritage site by UNESCO in 1979.

5. The country also has one of the world’s oldest observatories. Dating back to the 19th century BC, Kokino is the fourth oldest astronomic observatory in the world and is recognised by NASA.

6. Mother Teresa was born in Skopje, North Macedonia, 1910. Even though she was born to Albanian parents, she is considered to be one of the most famous Macedonians. Today, there is both a statue of her and museum dedicated to her life.

7. Talking about famous people, let’s discuss one of the most powerful rulers the world has seen. Alexander the Great, the world conqueror was Macedonian. His empire extended across Greece and Persia to India and Egypt. During his time, the Kingdom of Macedonia was the most powerful state in the world.

8. There is a country within Macedonia. In 1991, after Macedonia gained independence the small village of Vevcani also declared itself the independent Republic of Vevcani. It had its own flag, passport and currency but the republic didn’t last long and soon it became a part of the nearest municipality. However, the village still likes to think of itself as a separate entity and use it to attract tourists. A fun fact: If you drink enough Vevcani wine, you can get the citizenship.

9. Macedonia has two flags. Both its first flag and the current flag feature a yellow sun on a red background. The first version was based on a symbol found on ancient tombstones discovered in 1977 in the town of Vergina. So why did they have to change their flag? Enter Greece! The Greeks were annoyed as according to them the Vergina Sun was a Greek symbol and claimed that they owned the copyright to use it. As a result, Macedonia had to change its flag.

10. By now, you must have concluded that Macedonia rarely picks fight. So it should not be a surprise to know that the country got it independence peacefully. Actually, it is the only country that got independence from Yugoslavia without shedding any blood. It remained totally at peace during the Yugoslav war in the early 1990s

11. The world’s deepest underwater cave is found here. Cave Vrelo is a stunning underwater cave with a depth of 77 meters and an interesting place to visit in Macedonia.

Then there is cave Pesha which looks exactly like the Helm’s Deep cave from the Lord of the Rings and attracts many LOTR fans.

12. One of the most famous structures in Macedonia is the Millennium Cross. It is a 66 meter-high cross situated on the top of the Vodno Mountain in Skopje, and is one the biggest crosses in the world. The Millennium Cross was constructed in the honor of the 2000 year anniversary of Christianity.

13. Macedonia is an old country but it knows how to catch up with modern technology. In 2006, it became the first country in the world to have full access to wireless broadband.

14. Macedonia is known as the only place in Europe where you can find ruby gemstones.

Trip leader Sakshi’s Recommendations if you are visiting Macedonia:

Ohrid: Ohrid is a beautiful historic town located on the shores of Lake Ohrid. The town along with the lake is a UNESCO World Heritage site. Walk down the cobbled pathways and enjoy the architecture which dates back to the 4th century BC. Tsar Samuil’s Fortress is famous for gorgeous views over the lake and the city. Then there is Lake Ohrid itself. The turquoise waters sparkle in the sun and taking a scenic stroll along the town’s shoreside boardwalk is something you should not miss. Other interesting sights include Saint Clement Church, Bay of Bones and Monastery of Saint Naum. 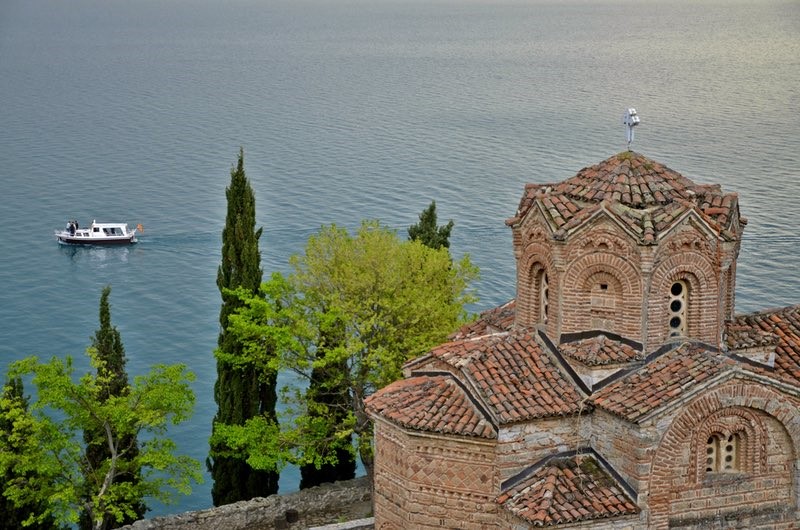 Mavrovo National Park: This is the largest national park in the country. Stretching over 192,000 acres, Mavrovo National Park is home to the highest peaks in Macedonia. You will also see Lake Mavrovo, the largest artificial lake in the country. Winters are best to ski around. And summer is when the park comes to life. With pine forests, karst fields, waterfalls and gorges the park is spectacular. You’ll also be able to witness the wildlife that includes bears, lynx, wolves, deer and many species of birds.