New Zealand is a giant playground with rolling valleys, dusted mountain peaks, crazy clear blue lakes and pristine beaches. The country is a dream for adrenaline junkies and nature lover. It is the country of the hobbits. Let’s learn some fun facts about this beautiful country:

1. The longest place name in the world is Taumatawhakatangihangakoauauotamateapokaiwhenuakitanatahu. Hey I am not making this up. It is actually a name of a hill in Hawke’s Bay. Try pronouncing it and let me know if you succeed. It will be some kind of record for sure.

2. NZ is the least corrupt nation in the world (tied with Denmark), according to the Corruptions Perception Index.

3. There is no corruption in the nature as well. Blue Lake, in Nelson Lakes National Park, has the clearest water in the world, with a visibility of up to 80 meters deep.

4. A beach is never too far when in New Zealand. No matter where you are, you’ll never be more than 128 km from the seaside.

5. Bungee jumping was born in NZ. There was an ancient ritual in Vanuatu where bungee jumps was performed by young men with just tree vines tied to their feet. AJ Hackett was inspired by the idea and thus the first commercial bungee jump began in the Kawarau Bridge in Queenstown, back in 1988.

6. Kiwis are big fans of the Star Wars movies. In the 2001 New Zealand Census, over 50,000 people in the country listed their religion as “Jedi”. That made it the second highest religion in the country. Now that’s the dedication!

7. Wellington is the southernmost capital city in the world. New Zealand is also the 3rd closest country to Antarctica after Chile and Argentina.

8. It is a land of sheep. Currently, there are 9 sheep per each person in New Zealand.

In fact, only 5% of NZ’s population is human- the rest are animals. This makes New Zealand proud supporters of the highest human to animal ratio in the world!

9. The Hector’s Dolphin, the world’s smallest marine dolphin is only found in New Zealand waters. It grows to a maximum length of 1.5 metres.

There is a legend about a super friendly dolphin living in New Zealand. Let me tell you about Pelorus Jack, a dolphin who guided ships through dangerous and rocky waters around NZ. Jack was a Risso dolphin and used to escort ships through a stretch of water in Cook Strait in the early 1900s. With rocks and strong currents, the area is dangerous to ships, but no shipwrecks occurred when Jack was present.

10. Bats are the only native land mammals in the country. The rest were introduced by Maoris and Europeans.

Also, there are no land snakes in NZ.

11. When in New Zealand, look out for the notorious kea. Kea is a bird native to NZ and is known for pulling windscreen wipers off cars and eating the strips of rubber from windows.

12. New Zealand is home to the giant weta, the heaviest insect in the world. It is heavier than a sparrow and looks like a giant cockroach.

13. When I say NZ is a magical country, it’s because they have a wizard! In 1990, New Zealand became the first country in the modern world to appoint an Official National Wizard. His duties are to protect the government, cast out evil spirits, cheer up the population and promote a universe which puts NZ on top of the world. What a wonderful weird country!

14. The first man to climb Mt. Everest, Sir Edmund Hillary (along with Sherpa Tenzing Norgay), was a Kiwi.

15. The country also gave ‘proton’ to the world. Baron Ernest Rutherford, the first person in the world to split the atom in 1919, was also a Zealander. He also discovered (and named) the proton.

16. There are many weird and strange things which exist in NZ. One of them is Gisborne airport where the train tracks run across the middle of the runway. Quite often, trains and planes have to stop until the other moves out of the way. Best example of living in harmony.

17. When you think Penguins, you think Antarctica. But do you know that NZ is home to more species of penguins than any other country.

18. New Zealand became the first country to give women the right to vote in 1893. The country also believes in women leadership.

New Zealand is the only country in the world where all the highest positions have been simultaneously held by women: In 2006, the Queen, the Governor-General, the PM, the Speaker of the House of Representatives and the Chief Justice were all women.

19. Dubbed the ‘city of sails’ Auckland is home to the largest number of boats per capita in the world. One in three Auckland households owns a boat.

Cars are just as prevalent in New Zealand! And who won’t love to drive on the scenic routes of the country. The Kiwis love their cars and the car ownership rate here is one of the highest in the world.

20. According to a law, NZ high schools and universities are permitted to keep a pound of uranium or thorium for conducting nuclear experiments. However, there is a $1 million fine if it explodes.

21. NZ gives driving lessons to dogs. Two rescue dogs were taught to drive a car around a track, in order to prove the intelligence of shelter animals. And you know what, they passed the test. Isn’t that both funny and adorable?

22. Baldwin Street, in Dunedin, is the world’s steepest street. It has a gradient of 38 degrees.

Each year, a race is held here and you should know by now that the country believes in something ‘hatke’. Known as “Jaffa Race”, it a race of candies. Jaffas are chocolate candies popular in the country. During the race, 75000 Jaffa lollies are rolled down the street where they compete for the first position. It is a charity event and the people can buy a ticket to get the winning candy. The race is also known as “running of the ball” errrr what?

23. The country is breathtakingly beautiful and most of the country has been carefully protected and preserved. Over one third of the entire country of New Zealand is made up of protected land and marine areas.

24. The logo for the Royal New Zealand Air Force is a kiwi – a flightless bird. How ironic!

25. We all know that ‘Lord of the Rings’ was filmed here. The movie helped a lot in boosting the country’s economy. So in 2012, New Zealand broadcasted the first weather report in Elvish language.

Click here to check out some of the most beautiful Lord of the Rings locations in New Zealand!

Trip leader Sakshi’s Recommendations if you are visiting New Zealand:

Adventure activities:  New Zealand is perfect for all you adrenaline junkies. Go for bungee jumping, sky diving, jet boat rides, river rafting and other activities. Quennstown is the best place to go crazy.

Click here to read about some of the best adventure activities in New Zealand!

Fiordland National Park and Milford Sound: Rudyard Kipling called Milford Sound the “eighth wonder of the world”. One of the most stunning places in NZ, you will see dramatic fiords, spectacular waterfalls and snow-capped peaks.

The park is a haven for hikers with some of the country’s best hiking, including the famous Milford Track. You can also opt for sea kayaking to explore the fjords.

LOTR locations:  Explore Middle earth and visit all the famous places where the films were shot.

Check out for more information here.

Waitomo Glowworm Caves: The caves feel unreal and it feels like that you have stepped into a fairytale. You must have guessed from the name that these caves glow. There are more than 300 limestone caves in the area with plenty of options available depending on what you’re looking to do. There’s the three-hour black-water tubing trip, the five-hour trip that includes abseiling and climbing, or if you like it easy, a boat through a bigger cave. 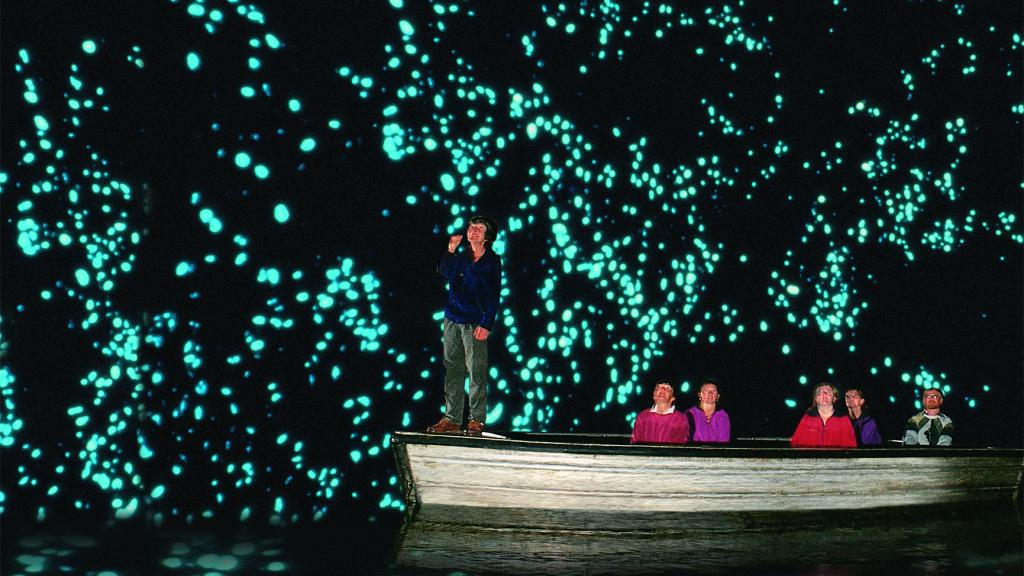