Sun-drenched beaches and rugged mountains have caused this country to become quite the desirable tourist destination.

1. Though the country boasts of beautiful beaches, it actually named after a mountain. Montenegro means “Black Mountain” in Venetian Italian which referred to the country’s Mount Lovcen standing at a height of 5,738 ft.

2. Mount Lovcen is actually home to the world’s highest mausoleum. One of the greatest Montenegrin poets and rulers of all times, Petar II Petrovic Njegos, rests at the top of this famed Black Mountain.

3. But that doesn’t take away from the fact that the country has every right to boast of its beaches with as many as 117 beaches!

4. Incidentally, the country only gained independence from Serbia in the year 2006, making it one of the newest countries in the world technically!

5. The country’s claim to fame has been given to 007. Yes, the 2006 James Bond flick, Casino Royale. But wait a minute, the movie was actually never shot there! The movie was shot in Czech Republic. Well, nevertheless if that’s how we stumbled upon the gem that is Montenegro then nothing like it. Coincidentally, while it did not get the country as much fame at the time but actually Brad Pitt’s debutant film “The Dark Side of the Sun” was shot here decades ahead of Casino Royale, in 1987!

6.It is also home to the biggest canyon in all of Europe! Tara Canyon has a depth of 4,300 ft. and a length of 82km. With its deepest point being at 1.300m, it is the second deepest canyon of the world.

7. Speaking of other ranks that the country holds in Europe, Mount Orjen’s village of Crkvice is the wettest place in all of Europe with an annual precipitation of 5,000mm.

8. They also have a very special tree named the Stara Maslina. What’s special about a tree? Well, maybe the fact that it has been around for over 2,000 years! Some even speculate that it could be the oldest olive tree in the whole wide world.

9. Another record held by the country is that of having been the place where the first ever national level printing press came into existence, the Štamparija Crnojevića.

10. While the Euro currency is used in the country. But the country actually never signed an agreement with EU, thus, it cannot actually print, mint or issue notes and coins officially!

11. But you have to love the constitution of this country because of their devotion shown towards the environment with their description of the state as a “civil, democratic and ecological state”. I reckon that this country came into existence at a time and age where environmental concerns and their impact had already become a reality for us and thankfully, they gave it the rightful importance by conferring it to the status of their state’s identity. It was the first country in the world to do so.

12. In times where people are expected to live as per law and order, Montenegro’s Krvna region still recognizes the right to vengeance. Now, I’m sure you’ve heard of a lot of rights granted to citizens but what possibly could a right to vengeance mean? It means that if an individual is murdered then the victim’s family can retaliate in kind. Erm. Okay, we are good without this law!

13. One of Europe’s last remaining primeval forests is found here, the Biogradska Gora National Park that comprises of approximately 1,600 hectares of virgin woodland. 10% of the country’s surface is actually covered with national parks.

15. The population actually makes for one of the tallest populations in the world. Well, you would think so since the average male height is 6 ft!

16. The prince of Montenegro and Macedonia, or rather the claimed prince Stefan Cernetic was actually a fake prince! The façade was complete with ceremonial flag cars, pseudo-official stickers and what not. They not only misrepresented themselves but also falsified documents. In fact, in 2015 he even conferred the status of countess on actress Pamela Anderson. It was only in 2017 that the Italian police arrested the fake prince. Now that is one elaborate ruse or an attempt at it, that too a failed one. ?

1. The UNESCO Bay of Kotor is the crown jewel of Montenegro. It’s a preserved fortified medieval town with the Cathedral of Saint Tryphon towering over it, the glistening blue bay and the mountains surrounding it. Kotor is where the vacation mode will just come to envelop you as you walk around its old town, visit the island churches, gaze at its pretty views and take the laidback way to let life sink in. There has been such talk of the spectacular sight that the Bay of Kotor is that I’ve greatly stalked it online! I can’t decide whether it looks prettier in the daylight or just as evening starts to set in with the sunsetting and the streets starting to light up?

Click here to check out some of the best eateries in Kotor!

2. The town of Perast is made up of stones and palazzos and lakes that gaze right at them. It is straight out of your European dream and this one is sure to get you clicking pictures or just smiling at the sights around happily.

3. Lake Skadar is the largest freshwater lake across Montenegro and Albania. The lake has a dedicated national park because it is a bird watcher’s paradise and a well full of wilderness. You can even see the green mountains of Karst, the lily fields and stunning shores. Make sure to visit the nearby villages to get the essence of what was once a battlefield and today makes for a traveller’s delight!

4. Glacial lakes, the tallest peak of Montenegro and rocky outcrops all wait for you at the Durmitor National Park where the limestones stretch massively in this nature lover’s treat.

5. Now that you have heard so much about Njegos Mausoleum why not go pay your respects? After all it has a great role to play in the country’s name. Who is game for climbing the 461 stairs to the world’s tallest mausoleum?

6. Heritage lovers would enjoy walking around the honorary capital, Cetinje. The former royal town houses relics, a monastery and remnants of an era that showcase all that this part of the world had once been.

7. Lustica Bay is a town specifically constructed to cater to the tourists. It overlooks the turquoise Adriatic seas and lets one indulge in the sun-kissed life.

8. And if you are of the opinion that the island way of life would do you well then, the Sveti Nikola island will make you extremely happy with its breath-taking waters and sights to see.

We organize trips to Montenegro and the Balkans region every year. To see the magic yourself you could come along someday! 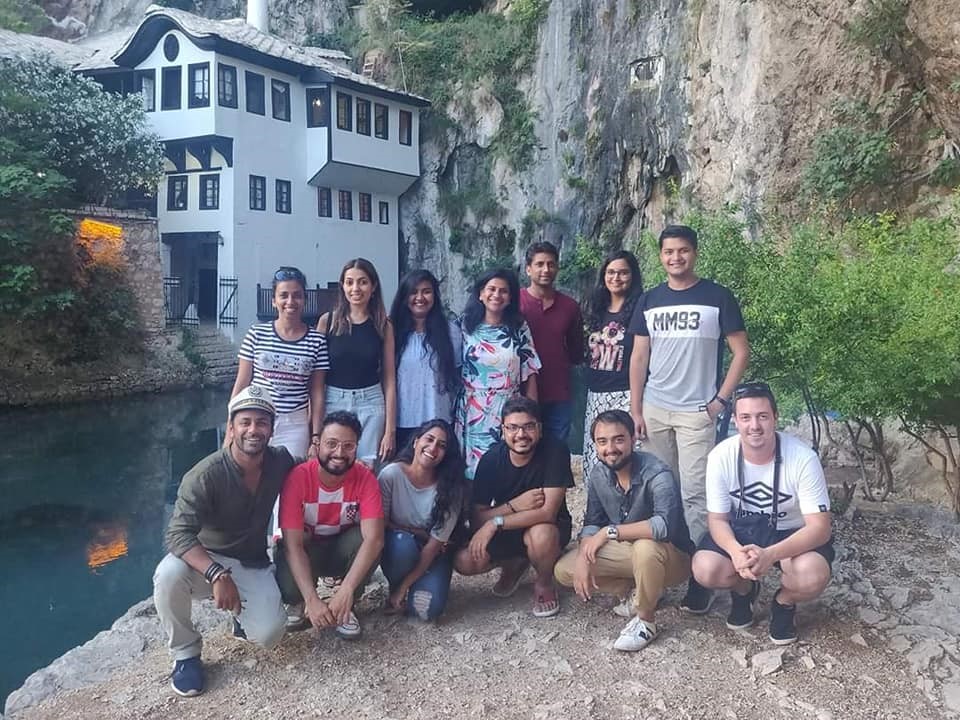 In fact, from one of our batches in the year 2018, Captain Nero narrated how magical the last evening at Montenegro was as the group took a boat ride in the ever so beautiful Bay of Kotor. Click here to read the blog.

Flights from India to Montenegro generally involve a layover in either Istanbul or Italy.