The name “Indonesia” is derived from the Latin word Indus meaning “Indian” and the Greek word nesos meaning “island.” Indonesia was originally called Indian Archipelago or East Indies Islands. Indonesia is part of the Malay Archipelago between the Indian and Pacific Oceans. It shares land borders with Malaysia, Papua New Guinea and East Timor.

The country is a geological wonderland. With the equator running through it and hundreds of volcanoes in its heart, Indonesia is a very interesting and exotic destination. Although Bali gets plenty of attention, most people don’t know much about the rest of Indonesia. Let’s find out:

2. Indonesia is the fourth most populous country on the planet. It is also home to the world’s biggest Muslim population. 12.7 percent of the world’s Muslims live in the islands of Indonesia.

Java is the world’s most populous island, with a population of around 140 million people.

3. Indonesia is heaven for nature lovers. It is known for being “megadiverse”, meaning it has a vast number of different species, many found nowhere else in the world. There are only 17 countries with this distinction.

Papua is home to more than half the animal and plant species in Indonesia, including more than 200 mammals, 600 breeding birds, and more than 2,000 types of orchids.

4. Indonesia is the playing ground of increasingly rare, exotic and absolutely beautiful animals that are slowly reaching critically dangerous levels of endangerment.

The country is home to the Komodo dragon – the world’s largest lizard. These lizards can grow up to 3 metres in length weighing up to 150lbs. These animals are truly terrifying with their toxic bites, huge stature and carnivorous diets. They hunt and kill animals that are far bigger than them, including humans. Yes they are man eaters!

Sumatra and Borneo are the only places in the world to see wild orangutans. Sumatra belongs entirely to Indonesia, and Borneo is shared between Indonesia, Malaysia, and Brunei. In Indonesian ‘orang’ means person and ‘utan’ means forest and so orang-utan quite literally means, ‘person of the forest’.

The Javan rhinoceros is also one species that is found only in Indonesia. The saddest part is that only about 50 of them are left in the entire world.

Tarsier is an interesting animal found in the island country. Their eyes are so big they cannot rotate them in their sockets (Dobby eyes. Potterhead anyone?). Luckily, their heads can rotate 360° to compensate.

5. Rafflesia Arnoldi is the largest individual flower on the planet. The flower which can grow to be 3 feet across and weighs up to 7 kg (15 pounds) is endemic to the Indonesian rainforests of Sumatra and Borneo. And before you dream of gifting this flower to your special someone, let me warn you that it is the stinkiest flower as well and is said to smell like decaying flesh, thereby nicknamed “corpse flower”.

6. Indonesia has the third most volcanoes (139) in the world, behind the US and Russia. The Pacific Ring of Fire is the world’s largest earthquake belt with fault lines running from Chile to Japan and Southeast Asia. With Indonesia having a high number of active volcanoes and sitting between the most active seismic areas on earth, it is the hottest spot on the Ring of Fire.

Indonesia is home to one of biggest, boldest and loudest eruptions of recent times. Between Java and Sumatra lies the famous volcanic island of Krakatoa. When this volcano erupted in 1883, it had a force equivalent to 2,000 Hiroshima bombs resulting in two gigantic tsunamis that killed over 36,000 people and destroyed 165 coastal villages. The explosion was heard from Sri Lanka to Perth, Australia, and the resulting waves led to a noticeable surge in the English Channel. It was the greatest volume of sound recorded in human history.

Lake Toba, the world’s largest volcanic lake is located in North Sumatra. The lake is simply enormous and has been measured to be roughly 500 metres deep, 100 kilometres long and 30 kilometres wide. The explosive eruption that formed the lake is thought to have happened 69,000 to 77,000 years ago. It was the largest known explosive eruption in Earth’s history in the last 25 million years

7. ‘Sona Kitna Sona Hai?’ The Grasberg mine, located near Puncak Jaya, is the largest gold mine and the second largest copper mine in the world.

8. Borobudur temple in Central Java is the largest Buddhist temple in the world. Built during the 9th century, it took 75 years to construct the temple. It is decorated with 2672 relief panels and 504 Buddha statues.

9. December 26, 2004 is a dark day in human history when the world’s second largest recorded earthquake, a 9.3+ magnitude, struck off the coast of the Indonesian island of Sumatra. The resulting tsunami hit more than a dozen countries around the Indian Ocean, leaving more than 230,000 dead and millions displaced.

10. Any football fan here? The first team to qualify for the FIFA World Cup in South East Asia was from Indonesia. The team was named as Dutch East Indies and got qualified in 1938, but lost 6-0 against Hungary.

11. People tend to get confused between the flags of Indonesia and Monaco. Both the flags look very similar, the only difference being that Indonesia’s flag is slightly wider. As they say, the answer lies in the details.

Reverse the Indonesian flag and Tada! You’ve got the flag of Poland.

12. Indonesians love their ramen a little too much. In 2005, Indomie, an Indonesian company broke the Guinness Book of World Records category for “The Largest Packet of Instant Noodles”. It had a whopping 665 kgs of noodles.

13. Indonesia became the first developing country to operate its own domestic satellite system in 1976 after the launch of ‘Palapa’.

14. Indonesia is home to many indigenous tribes. Among them live the deadly headhunters. Head-hunting is the grisly practice of killing a person by cutting off their head and then preserving the ‘trophy’ and displaying it. Although the practice died out decades ago, but some indigenous families have kept their grandfather’s “trophies” stored in closets. A literal meaning to the phrase “skeletons in the closet”!

Among the Mappurondo on the Indonesian island of Borneo, they still practice headhunting. However, they use coconuts instead of real heads during their simulated “hunts.”

Do you know a similar head hunter tribe exists in India as well? Yes, in Nagaland!

15. The country of Indonesia is ethnically diverse, with around 300 distinctive native ethnic groups and over 740 different languages and dialects spoken in the country.

16. Java has become a slang term for the word coffee, after the coffee beans grown on the island of Java. But have you heard about the most expensive coffee in the world? Kopi Luwak, also known as “cat-poop” coffee is made by feeding small, catlike civets coffee berries. After they defecate, the faeces are collected, washed, and ground into coffee, which supposedly has an unrivaled richness and little bitterness. Despite the weird process, Kopi Luwak is the most expensive coffee in the world, costing around US$1,000 per pound.

17. The Pasola is a harvesting festival in Sumba, Indonesia where two teams of horsemen gallop at each other, hurling their spears at rival riders. This was known to be the bloodiest harvest festival in the past when the spears were made of metal and were sharp enough to kill a human. It was a matter of pride to die during this festival. Today, people use wooden spears with blunt tips to ensure minimum injuries.

18. If you go to Bali, you’ll see that many people share the first name. This is because Indonesian children in Bali are named according to their birth order.

The 5th child is named Wayan again. These names are unisexual and sometimes an “I” is put in front to indicate male and “Ni for female. Balinese love Bollywood, especially Shahrukh. I wonder is it because of his dialog “Naam to suna hoga”?

19. The Dani tribe in New Guinea has the most unusual custom of amputating one or two joints of one’s finger when a close relative dies. This practice was followed by the women of the tribe. It is now prohibited but you will still see many old women with missing joints on their fingers.

20. Almost everyone in Bali file their teeth. This practice is rooted in the belief that the six main vices—anger, confusion, jealousy, drunkenness, desire, and greed—all enter the body through the top six teeth. By filing away the teeth, you are stopping the evil to enter your body.

Trip leader Sakshi’s Recommendations if you are visiting Indonesia:

When we think about Indonesia, Bali is the one place which comes to mind. Bali is stunning but there are so many other beautiful places in the country which you can explore.

Raja Ampat island is known as one of the best diving spots in the world. The archipelago is celebrated for its rich marine life and underwater coral reefs – home to as many as 75% of all known coral species! The underwater experience is so beautiful that you won’t want to come outside.

Watching the sunrise from Mount Bromo is one of the most popular activities here. When in Indonesia, you should climb at least one volcano and Mount Bromo is one of the most picturesque on the list.  Tucked within East Java, Bromo Tengger Semeru National Park, this volcano is often surrounded by smoke and a multi-colored sky. The views from the top are magical as the sun appears on the horizon over the blue misty volcanic craters.

Stroll with the dragons in Komodo National Park. Komodo National Park, a UNESCO World Heritage site encompasses five main islands and a number of smaller ones. And even though there are several endemic species found in the park, the star is Komodo dragon. These reptiles roam freely over the islands, and visitors rely on experienced tour guides for sightings and to keep them safe. The marine life around the islands is fantastic and provides a world-class diving experience.

Swim in the largest volcanic lake in the world. Lake Toba is stunning from every angle. There are many small villages surrounding the lake where you can explore the Batak culture. You can also visit Samosir, the small charming island in the middle of Lake Toba.

Azure waters and unique landscapes define Nusa Penida. Before social media, the island was fairly remote and not popular among the travellers. Now the island is gaining popularity as more and more people visit each year. There are day tours from Bali which I personally think can be avoided. The day tours will rush you without giving enough time to spend at a place. “Hurry Up” was the only thing I heard the entire time I was on the island. It’s your vacation and you should be able to slow down, take a walk and enjoy the views around. You should stay at least for a couple of days and explore the pristine island. 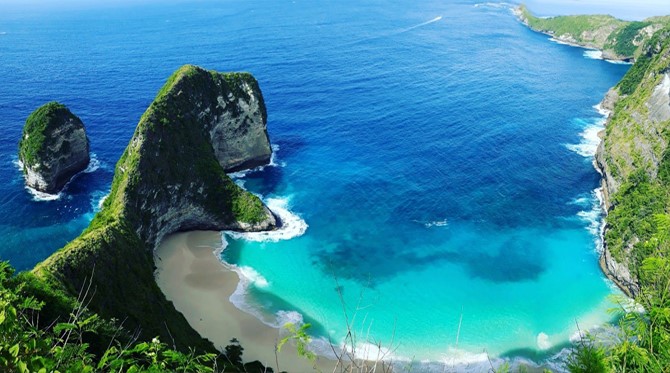