“The Last Shangrila”, “Land of the Thunder Dragon”, “Happy country”. There are so many names for Bhutan. But did you know that Bhutan was completely isolated from the world till 1974. It was recognized as a country by the United Nations in 1974. In fact, people knew so little about it that the Western World thought Bhutan to be a fictional place, like Narnia.

Bhutan is a tiny landlocked country in the Himalayas bordered by India in the south, east and west and by China in the north. This fascinating kingdom shrouded in mystery and magic holds many surprises.

1. We all know Bhutan as the happy country. The country does not believe in GDP as an indicator of economic growth and development. It has introduced another measurement known as Gross National Happiness. In 1970s, the fourth king came up with the concept of GNH. The four pillars which measures Gross National Happiness are sustainable development, preservation and promotion of cultural values, good governance and a healthy environment. All of Bhutan’s governmental policies and projects have to undergo a GNH screening system before approval to make sure they do not have a negative impact of its people’s wellbeing.

The United Nations bought into the idea in 2011 and released the World Happiness Report in 2012.

2. Bhutan is the first country in the world with specific constitutional obligations on its people to keep at least 60 percent of the nation under forest cover at all times. Currently 72% of the country is forested.

This also makes Bhutan the only carbon negative country in the world, which means that it absorbs more carbon dioxide than it produces.

In 2016, the country planted 108,000 trees to celebrate the birth of its prince. This is so much better than throwing parties. We should learn how to love and protect our environment from Bhutan.

3. We complain about the traffic no matter where we live. Just imagine a day when the traffic lights stop working. It will be chaotic. Bhutan, on the other hand handles it quite well. It is the only country in the world that has no traffic lights, not even in its capital city of Thimphu which has the heaviest traffic. The traffic is directed and controlled manually by the policemen. It helps that the people are also obedient and follow the rules diligently.

Funny how public didn’t like when a single signal was installed saying that it looked ugly and they preferred the policemen. And you know what, the government gave in too. The signal was removed within a day.

4. In 2010, Bhutan banned the production and sales of tobacco products, and became the only country to do that. Smoking in public areas is illegal, however people can smoke in private. The products are imported from other countries and huge taxes are imposed to discourage purchase.

5. Gangkhar Puensum, the highest mountain in Bhutan (24,840 ft) is the highest unclimbed mountain in the world. The mountains are sacred in Bhutan. The locals believe that they are the home of the spirits who should not be disturbed.

Many attempts were made to climb Gangkhar Puensum, all unsuccessful due to bad weather conditions. The first team which tried to attempt the summit could not even find it because the maps were so inaccurate. Looks like the spirits didn’t want to get disturbed. The government has prohibited climbing on this mountain since 1994.

6. When someone offers you food in Bhutan, you should refuse it. Oh no, not because “Mummy ne bola hai strangers se kuch nahi lena”. Refusing food the first time is the custom in the country. This is to show respect and gratitude. You should cover your mouth and say “meshu meshu”. You can accept the food after two or three offers.

7. Bhutan is one of the last countries in the world to get television and internet. There was a ban as the government thought that it would corrupt the lifestyle of the people. The ban was lifted in 1999, and the first show broadcast was that of the 1998 World Cup Final in France.

8. You will see most of the people wearing the national dress of Bhutan (Gho for men and Kira for women). This is because it is mandatory to wear to schools, government buildings or on any formal occasion. The country thrives on the traditional values and the people don’t feel restricted by these rules and obligations and are full of pride for their nation.

9. Bhutan provides free basic education and healthcare to all its citizens. The government charges no tuition fees and even provides free stationery and textbooks to rural children. The literacy rate has significantly increased over the past several decades.

Besides, the Bhutanese enjoy basic healthcare service at hospitals or health clinics. As a result, infant mortality has dropped and life expectancy has increased in recent years.

You can see how much the government care about the citizens by the fact that the Prime Minister of Bhutan, Dr.  Lotay Tshering still sees patients every Saturday. Tshering, a trained urologist has refused to give up his practice. He attends surgeries on Saturday mornings. On Thursdays, he dedicates his time undertaking academic rounds with trainee medical staff and new doctors.

“I was not born a doctor, but I will die as one” says Tshering.

10. Bhutan is a matriarchal state. Women head the families and run all businesses. They inherit properties, and it is the man who has to move into the house of his wife after marriage.

11. It’s strange to know that Polygamy is legal in Bhutan (even after being a matriarchal state). The fourth king of Bhutan has for wives. However with time, polygamy is becoming non-existent in the country and most of the people marry only once these days.

12. The fourth king of Bhutan Jigme Singye Wangchuck was responsible for a lot of positive changes in the country including Gross National Happiness. But he surprised everyone when he stepped down from the throne and handed the crown to his eldest son in 2008. At the age of 28, King Jigme Khesar Namgyel Wangchuck became the youngest reigning monarch in the world.

A king voluntarily abdicating the throne is not a common sight. He also realised the fact that Bhutan may not always have a good and honest king, so he favoured democracy and elections were held with the establishment of a constitution in 2005, thus converting Bhutan into a constitutional monarchy.

The retirement age of a king was also decided at 65 years. The current king is known for his humble personality and humanitarian efforts. He loves to meet and talk to the citizens of his country and has gained the title of “People’s King”. No wonder why the people love the royal household.

13. Have you ever been invited to 2 birthday parties on the same day? Such a coincidence! Now what if I tell you that there is a village in Bhutan where everyone celebrates their birthday on 1st January. Sounds weird right!

Due to illiteracy or ignorance, people (especially who are living in a rural area) don’t remember their birthday. So to solve this issue, the government has listed their birthday to be on New Year’s Day. It confuses the outside world for sure. A delegation of Bhutanese folk singers was traveling to Germany for an international festival. The immigration official on duty was confused to see that every single person was born on 1st January. He was suspicious and called his supervisor. Few calls were made and they all laughed after they told how things work in Bhutan. What a charming country hehe!

14. Bhutan surprises you but it can also give you a shock. One of them is the phalluses drawings and symbols you will find across the country. The Bhutanese believe that phalluses help ward off evil. They are also a symbol for fertility and good luck. In fact, there is a temple of phalluses and it is believed that if a couple worship in the temple, they will be blessed with a child.

15. The national animal of Bhutan is “Takin” and it is as unusual as the country. It resembles a goat and an antelope and is endemic to Bhutan. For the longest time, it was thought to be a mythological creature (like a unicorn).

Trip leader Sakshi’s  Recommendations if you are visiting Bhutan:

Tiger Nest Monastery: Dedicated to Guru Padmasambhava (widely regarded as the Second Buddha), Tiger Nest Monastery or Taktsang Monastery is easily Bhutan’s symbol of pride and respect. The trek is not too difficult, and the best way to do it is to walk at a steady, comfortable pace. Most of the walk is through a hilly forest and as you keep walking, you will see rhododendrons, pines and a lot of prayer flags. There is an aura around the monastery, and spend an hour or two by yourself, observing the monks, the rituals, the beautiful rooms, and listening to the stories of Bhutan’s most favourite monastery.

Click here to read about Cafes in Paro in detail! 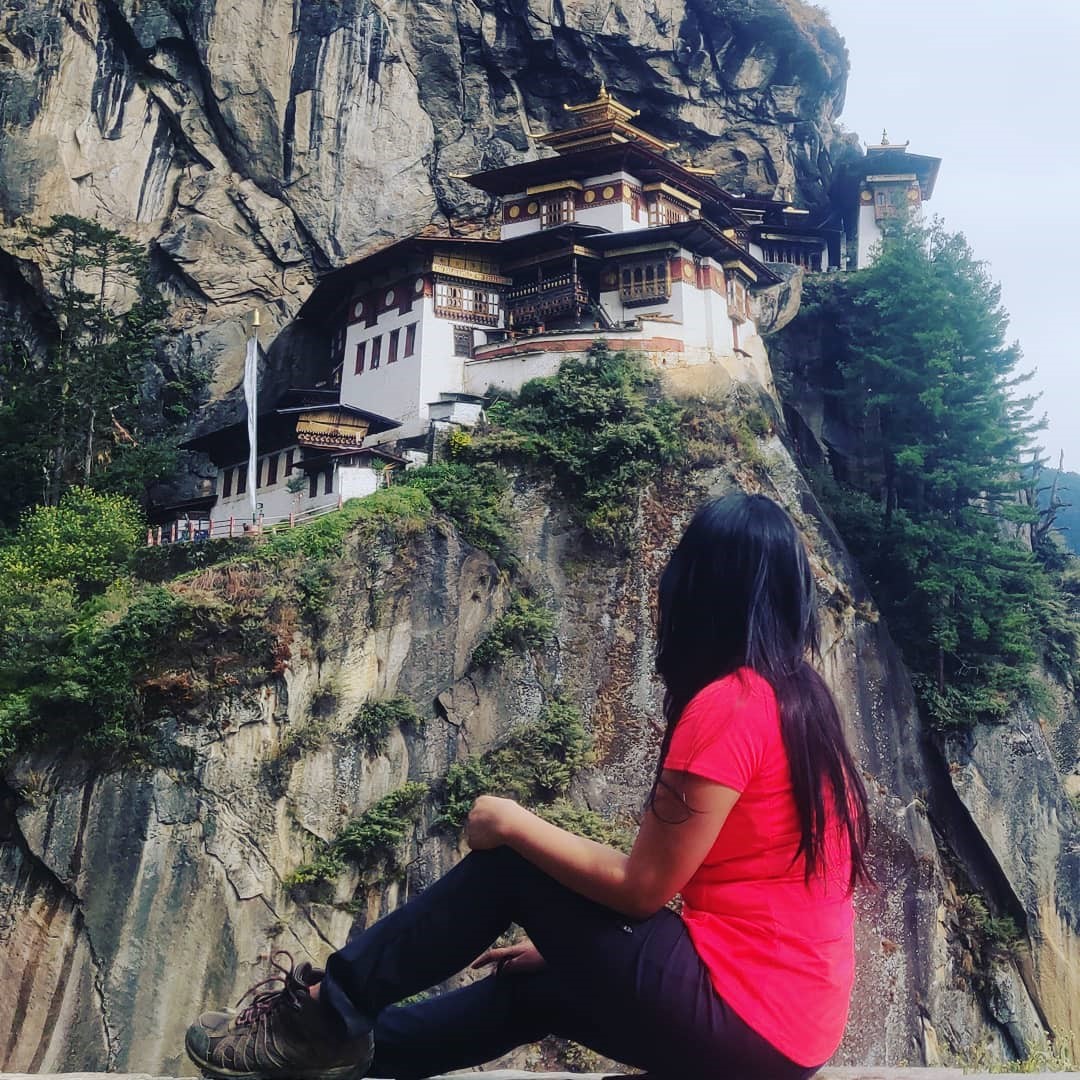 Dochu La: La means Pass and this is one of the prettiest passes in Bhutan on the way to Punakha from Thimphu. Stop at the pretty 108 Dochula Chortens, which were built on the orders of the Queen Mother, as a sign of respect for the soldiers who died fighting the insurgents in the 2003 war.The area is beautiful, overlooks some of the highest mountains of Bhutan, and is usually shrouded in mist, giving the entire place a mystical surreal feeling.

Click here to read about Cafes in Thimphu in detail!

Try archery: Archery is the national game of Bhutan. The instructor team also offers you traditional Bhutanese costumes to wear for taking photographs and for wearing while you shoot arrows at the target.

Click here if you want to read about Bhutanese Cuisine!