Day 4, Norway: As a kid, there were only two things I knew Norway for. For playing football hard and for its numerous fjords.

We booked an extension of the popular Sognefjord tour – Aurlandfjord and Naeroyfjord tour.

Instead of the bigger cruise, we opted to do the tour with high speed RIB powerboats. When we reached the dock, we changed into green lemony suits (that would help us float if by chance we fell into the water. God knows how much I wanted to jump in). The boat started sedately but suddenly our guide went into F1 racing mode and revved up the speed so much that we were almost flying on the water. Sometimes he would tilt and angle it jus like bike racers do on turns and it was a lot of fun with the cold water spraying us.

The fjords were beautiful and the looming mountains over the ocean on all sides, made me feel as if we were explorers back in the 16th century, off in search of new land and treasures. Having the whole fjord to us, and the absolute silence gave the whole place a very Game of Thrones, Lord of the Rings feel. Just like everywhere in Norway, there were waterfalls cascading down the cliffs in a dozen places.

The only times the wind and the speed didn’t threaten to blow us off the boat was when the guide stopped the boat near smaller hamlets by the water, to tell us stories. Undredal is an adorably charming village with just 69 people but 350 goats. It also produces the best goat cheese in the whole world. 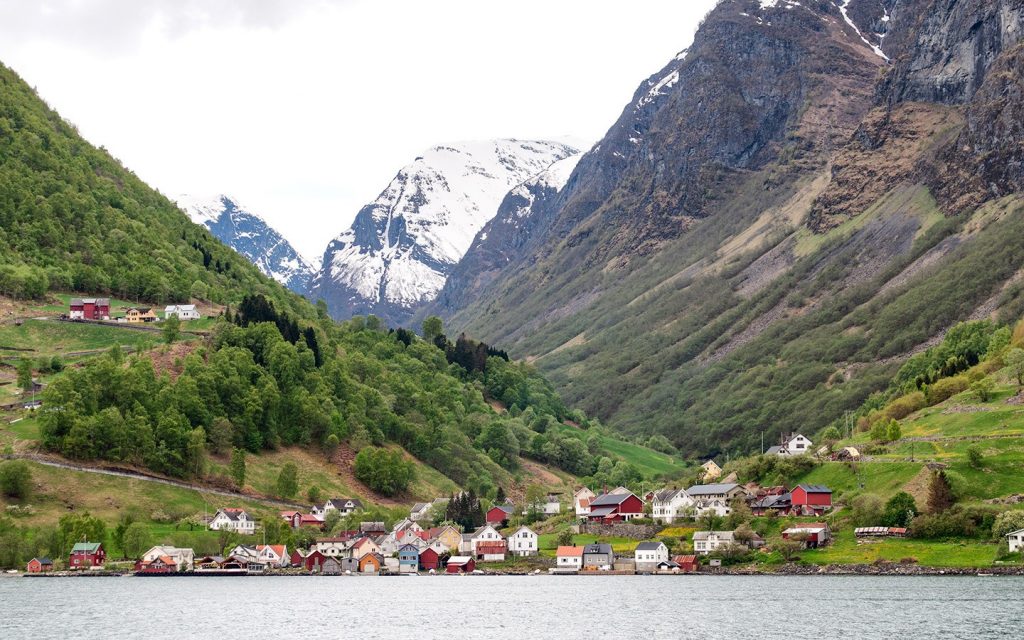 A little way ahead, and the guide asked us to look at a rock on the banks. A giant seal was sunning herself on it. I was so excited that I could have jumped with joy. I just couldn’t stop smiling and telling everyone “that’s a seal, a seal”. They nodded their heads back as if to say “yes boy, we got it. It’s a seal”, but I kept telling everyone and grinning stupidly

The seal enjoyed the attention, showing off her whiskers and perking her head as if to say “alright I know I am pretty, no need to stare so much”.

We also stopped for a bit near a steep cliff face. In the ocean. There was a lone house standing on top of it, very high on the cliff. It used to be a farmer’s house earlier but incredibly 25 years ago, an American bought it. For years he lived there alone in the summers and in the winters, he would come to land and teach in a school. Initially people wondered if he was crazy, to want to stay there alone. Years later he converted it into a Bed and Breakfast. To reach, you have to take a boat from Flam, stop in the ocean near this cliff, hike up all the way on this steep cliff over a waterfall and then reach what I think is the coolest Bed and Breakfast in the whole world. I, for one, would love to stay there!!!

Must do a fjord tour when you are in Norway. But more importantly, I saw a seal

We are doing a Norway trip in May-June 2020. The itinerary will be up on the website by end of December!