Tibetan Food has always been my comfort food since day 1. Be it enjoying a hot plate of steamed momos with my cousins in the chilly hill stations, or relishing a bowl of veg thukpa or mothuk in a cozy setting while admiring the view of the mountains, or how I’d rush to my favourite restaurant in Bangalore after a long day at work just to have a plate of spicy chicken laphing, this cuisine has always satiated my taste buds no matter what. 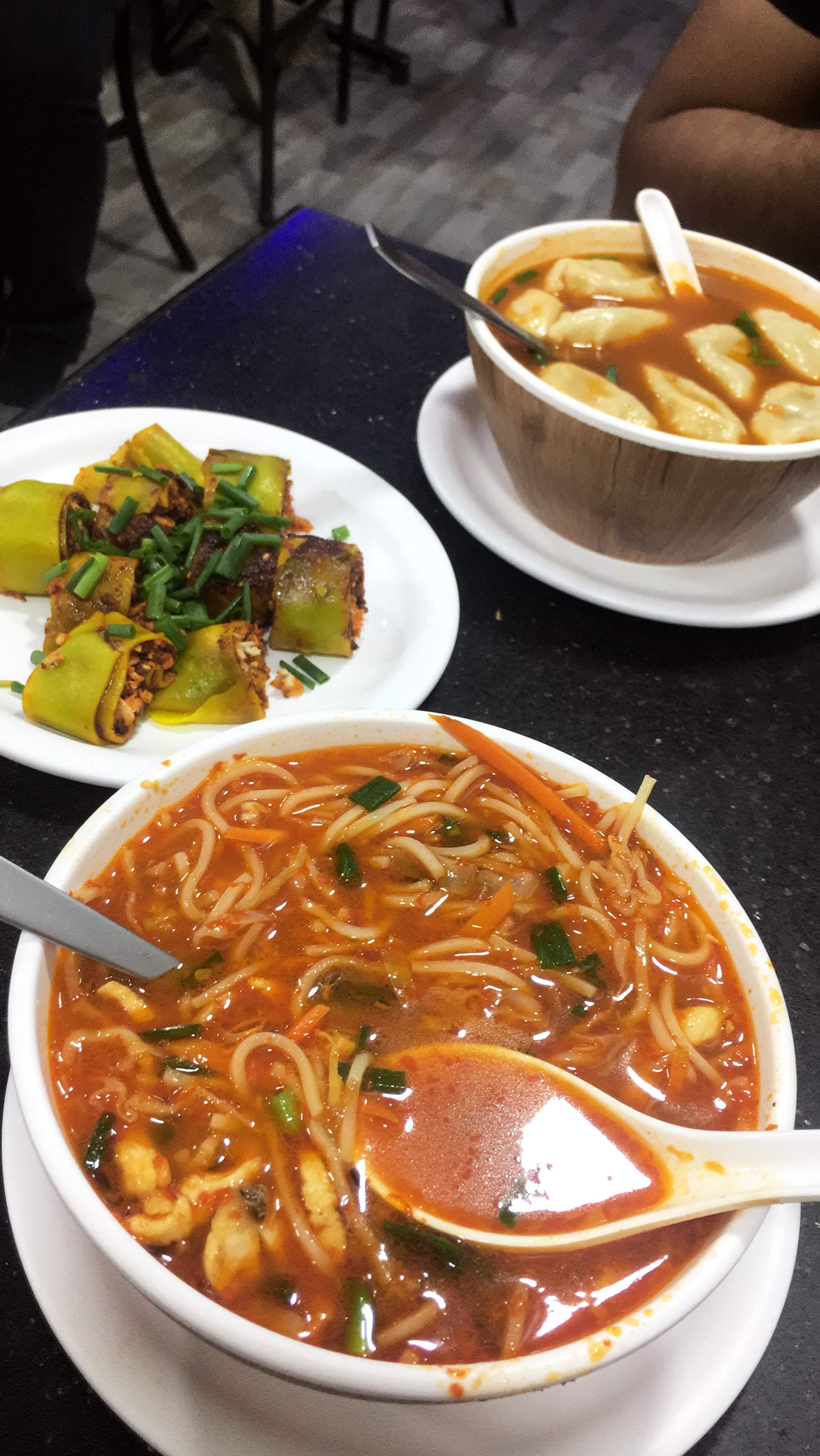 So, with regards to Tibetan Cuisine, it shows a major influence of Indian and Chinese methods of cooking but the ingredients that are used are mainly of the mountain areas. The food that one gets here is deliciously different and known for its exotic flavour. Well, that is good enough reason for you to try out Tibetan food, which for sure, is going to be a new experience for your taste buds.

So, first thing’s first, for all my meat-eater friends, you must try mutton or yak—especially if you’ve always been used to having chicken, beef or pork. It’s time to step outside your comfort zone! Trust me, you’ll be happy you did.

For my veg friends, how about dairy? From these same animals, you can get the freshest butter, yogurt, milk, cream and cheese. Their yak-butter tea is the real deal. Also, in certain regions you can still get your share of veggie noodle dishes, soups and dumplings.

If I had to pick one dish as the culinary ambassador of Tibetan cuisine, it would be the wildly popular dumplings known as Momos. They’re also comfort food, satisfying not only the palate but also the soul. Stuffed with soothingly velvety meat or vegetables, momos come in all shapes and sizes: there are round momos, crescent-shaped momos, veggie momos, yak meat momos, pork momos, chicken momos, and even cheese momos. The perfect momo is steamed, with soft skin that aptly lends itself for smooth chewing. however, you can also find other varieties of these yummy delights like fried momos or momos cooked in soup. With all the different dipping sauces that accompany momos — chili tomato, chili garlic, sesame tomato, tomato cilantro, and tomato mustard — this dish is sure to satisfy your taste buds!

A range of barley cultivars are grown by Tibetans and used for a number of dishes. The most prevalent and simple of these is tsamp. The roasted barley flour has been a staple food in Tibet since the fifth century AD. A hearty, nutty-tasting flour made from roasted highland barley, tsampa is most commonly mixed by hand with butter tea, dried chhurpi, and a hint of sugar to form a delectable dough known as pa. The art of rolling this little ball is actually pretty tricky, and does take some practice. Sometimes, a bit of sugar may be added while rolling the ball of tsampa and butter tea to make a sweeter treat. It has a delicious flavor and comforting smell and can also be added to mutton stew as a thickener and to provide extra flavour and calories.

From nomads to the Dalai Lama himself, Tibetans are almost as fond of noodles as they are of tsampa. In Tibet, rice can only be cultivated in lower regions in very limited amounts, so in Tibet the cuisine is heavily dependent on noodles. The most popular Tibetan noodle dish is thukpa, a Tibetan noodle soup. Both the ‘dish’ Thukpa and the ‘word’ Thukpa, refer to any soup or stew combined with noodles. Here are some of the soul comforting thukpas that we absolutely loveeee!

In the cold, high-altitude conditions of the Himalayan region, the salty, caloric, and energizing po cha—or butter tea—is a daily ritual, forming a large part of the Tibetan diet. Also known as Po cha in Tibet, it is made from churning tea, salt and yak butter. The tea is best suited for cold, high-altitude climates, as it contains high-fat caloric content that the workers needed to face the brutal climate of the Himalayas. The butter from the drink also helps prevent chapped lips – another valuable benefit on Tibet’s windy, exposed steppes. It is also believed that the tea used aids digestion, keeps the mind focused, and promotes a healthy cardiovascular system.

Yaks are one of the most common animals found in the Tibetan Plateau. You will see them in rural side of Tibet against a picturesque background of mountains, lakes and plains. Yak meat is one of the staple foods of Tibetan cuisine. The meat’s high protein content and natural leanness are quite good for one’s nutrition, with the addition of a great balance of fatty acids. All in all, it is tender, juicy, and well, obviously, meaty. If you are a big fan of wraps, as me, you will love the yak meat wraps served with vegetables and garlic sauce! Yak meat tastes like a duck meat, a little chewy.

Tibetan Yogurt is different from your typical yogurt. It is made from yak milk, not cow milk. For thousands of years, the nomadic ancestors of Tibetans have been making and eating yogurt from milk from their herds of yak and dri (female yak). Yak meat has a high butter fat content compared to cow milk, so Tibetan yogurt is much creamier than typical cow yogurt. The locals relish it with brown sugar, with warm steamed rice, or boiled wild sweet potato root with garlic, chili powder and salt, or with tsampa dough.

Tibetan people make the best of yak and sheep products for living. They are fond of varied sausages, including meat sausage, blood sausage, flour sausage, liver sausage, lung sausage, etc. Among all types of sausages, blood sausage and white sausage are the most common and popular ones. Blood sausage is made of small yak or sheep intestine tied to sections and infused with chopped mutton mixed with sheep blood, salt, Sichuan Pepper and Tsampa powders. Ingredients of white sausage are rice, sheep blood, mutton tallow and some flavors.