Say the word ‘Ladakh’ and one immediately visualizes a rider on his bike, whistling through an empty road, with mountains forming the back drop on every side. Close your eyes and you shall see stray monasteries straddled on hilltops, white washed walls and wooden panes and roofs painted red. Move further, and you will see monks in their maroon robes, their hair cropped as much as cropped can go, the golden-brass prayer wheels in their hands.

Your head and imagination shall take you to the most rugged mountain passes who’s roads have no tar, mostly gravel, loose dry mud and stones as big as your palm. Let the bike wobble and rattle and take you over icy streams that flow down from the mountain and rollick past the muddy road and fall indiscreetly into the valley on your right. Acknowledge them as every ten miles or so, you see an army soldier, a group of miners, or just some villagers standing by the road, all waving at you.

You cannot visit Ladakh without noticing the funny road signs that the BRO (Border Roads Organization) has put up, snap a picture in your camera in your head when you see yellow markers along the road, on which black chalk declares “Be Gentle On My Curves” as the mountain road winds, or “Don’t be a Gama in the land of the Llama”.

Think of Ladakh, and its but impossible to not visualize the blue Pangong lake – a sign perhaps that God does exist and made something so extraordinary.

This is the narrative of Ladakh that the vast realms of the internet give us, and what we ourselves chase. I have been doing that for six years myself.

I first went to Ladakh in 2008, to do a Rural Marketing Project part of my course at MICA (Mudra Institute of Communications, Ahmedabad). Back then, Ladakh was quieter. It had little signs of development, so I wonder how it would have been back in the fifties and sixties.

The Ladakh most people know now became everyone’s after the release of the movie ‘Three Idiots’ followed by hordes and hordes of flights carrying families, couples, gang of friends to Leh. The locals saw a window, a great opportunity in a land where jobs were almost non-existent and most boys worked in the army or as drivers and guides taking western adventurers across the region. Suddenly, hotels, restaurants and bike shops opened up in every nook and cranny of Leh. New camps came up every day in the Spangmik area of Pangong, all sitting shoulder to shoulder as close to the lake as they could dare. Unsuspecting ATV’s found their way into Nubra Valley, and were revved up on selected stony desert stretches.

Yet, there exist hamlets in ladakh where cafes and loud music haven’t found their way. There exist stories of valor that many outsiders haven’t yet heard of, monks who found salvation and watched all the travellers, as silently as the mountains did, never revealing the secrets of life to them.

Here at On His Own Trip, we aren’t just out there to stay in gorgeous little hotels, drive to beautiful places, or click photographs, or dance on the road, even though we truly enjoy all of that. The pursuit also is to learn about the place as much as we can and share those stories. 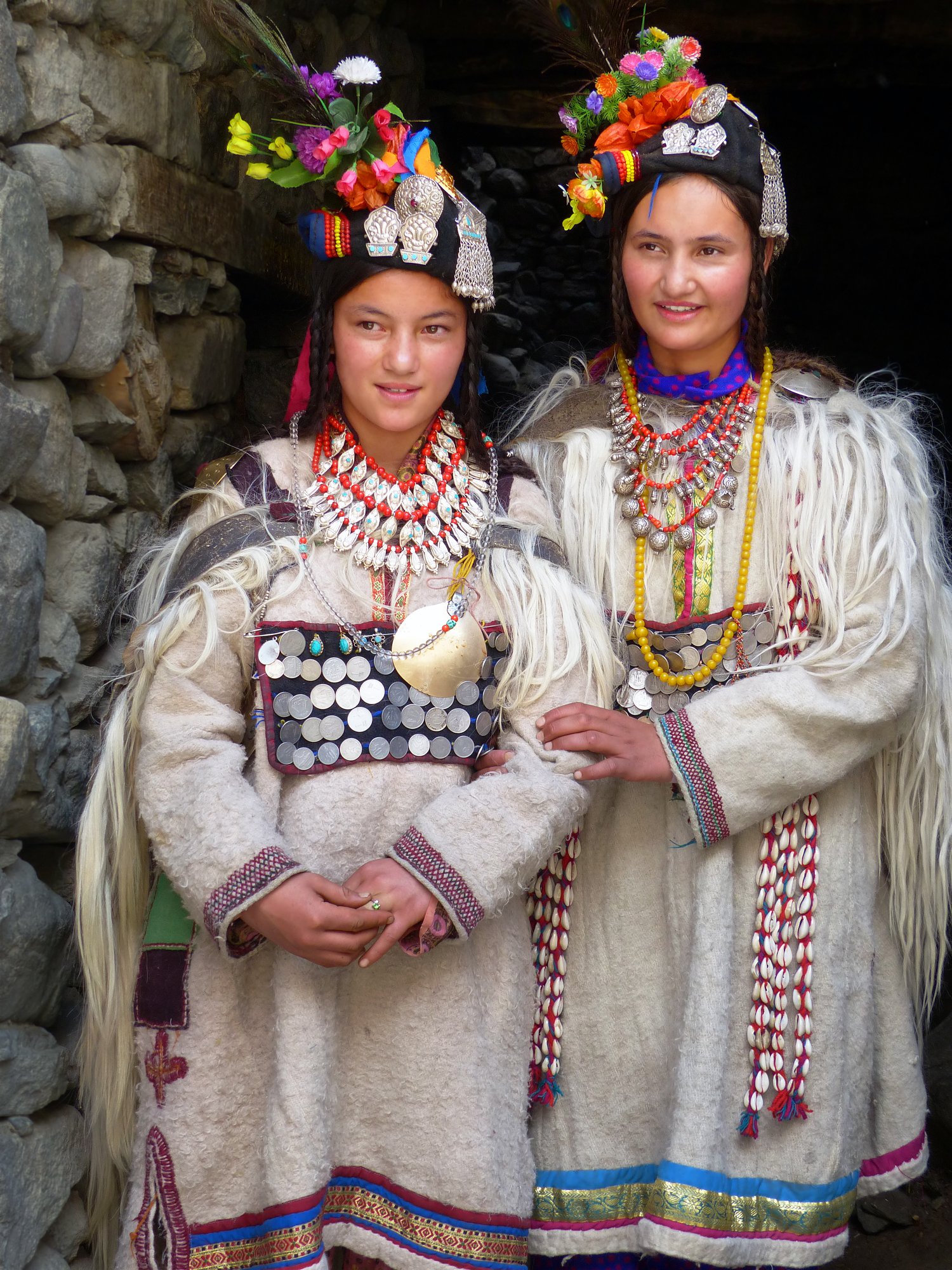 In a corner of Ladakh, lives a tribe relatively unheard of – The Brokpas of Ladakh. They wear beautiful floral headgear, have long flowing sheepskin coats, and till about twenty years back had probably never stepped out of their village. Their eyes and skin is lighter than the regular Ladakhi, they have high cheekbones and they are usually taller.

180 odd kilometres from Leh lie four villages, nestled deep in the mountains. These are the villages of Dah, Garkon, Hanu and Darchicks. The Brokpas stay in these villages. There is great rumour that they are descendants of Alexander’s army soldiers who stayed back in the valley, and that they are therefore pure Aryans. A similar claim is made by the locals of Malana in Parvati Valley. In the case of the Brokpas, there is no historical documentation confirming this. There has been a lot of promotion from the tourism sector in the area to project it as an ‘Aryan Valley’, but it would be naive to believe that fully.

Ask the Brokpas and they aren’t sure themselves. While some elders say that their ancestors have passed on the knowledge to them about being Aryans, some others believe that they are Dards, and came down from Gilgit (Balistan) and settled in the lower valley here some 2000 years ago. According to Dr Veena Bhasin, Professor of Anthropology, University of Delhi, they are the original settlers in Ladakh, and have been living there for over 5000 years! 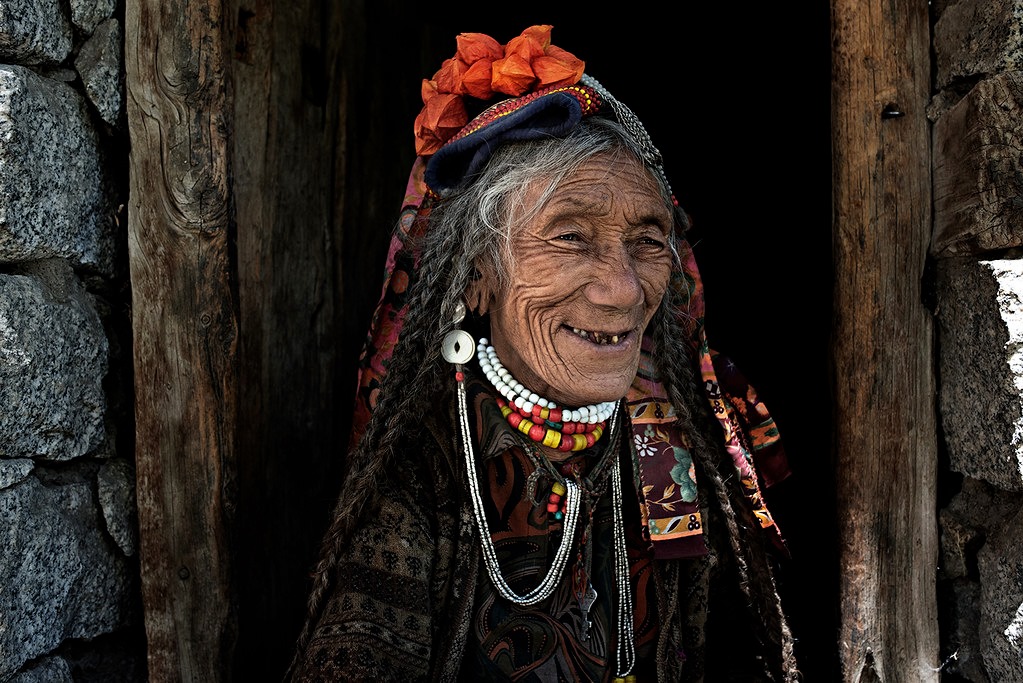 Every morning, there is one bus that leaves for Hanu from Leh at 7 am in the morning. It follows the Leh-Srinagar highway but when the road bifurcates at Khalsi, the driver steers right, while the route to Kargil and Srinagar is on the left.

The four villages lie on the banks of the Indus river. While Hanu Gongma, Dah, Biama and Garkon lie on one side of the river,  the villages of Darchiks and Baldez are on the opposite side and can be reached via bridges. The villages have green pastures, and barley, buckwheat, tomatoes, apricots grow abundantly. The Brokpas make delicious Apricot wine.

It has also been rumoured that since they are known to be “Pure Aryans”, a few times western women have travelled across these mountains into these villages hoping to have sex with some of the Brokpa men and give birth to a pure Aryan. But when some travellers asked around in the villages, most of the inhabitants said that though they had heard these stories, they hadn’t seen it with their own eyes, or know who they had consummated with.

The Aryan Saga, a documentary made by Sanjeev Siwan in 2006 tells the story of German women coming to Brokpa villages to have babies with Brokpa men. These women believe that the Brokpa are the only remaining pure Aryans. In the documentary a German lady is interviewed, who is in Darchik and has a liason with a Brokpa man, with the intent to have his baby. She reveals that there have been other German women before her and definitely she is the not the last one.

There are a lot of flowers in the farms and gardens, not surprising as the flowers form a large part of their life and headgear. This headgear is locally known as the ‘Tepi’ and has an assortment of colourful props and berry flowers. An elder member says, “there are no medical facilities in this area, so each prop in the headgear has some medicinal property”

The women can be seen sporting heavy metal, silver jewellery (they believe it wards off evil spirits), sheep skin capes and sheep wool pherans. Coins are often added in the costume. The men mostly wear maroon gowns with cummerbunds.

Konchuk Thorpa, an important elder in Darchik village who has immense knowledge about the tribe’s history says that there were originally three brothers – Galo, Melo and Dhulo who came down to Ladakh in search of greener pastures, and settled in the area. It is their descendants who are known as the Brokpas.

But some customs are still strictly followed. The Brokpas are endogamous – that is they marry only within the tribe. The total population of Brokpas is only 1800. If any girl marries outside caste or community, she is not allowed to enter the village.

The villages are close to Batalik – where one of the battles in the 1999 Kargil war happened. Though the Brokpas have been careful in preserving their heritage and customs, they identify themselves as being Indian, and helped the Indian army immensely during the war, showing them the way through the mountains, helping them know the terrain, carry good.

“No man in the tribe returned home during the six months that the war happened”, Konchuk says proudly. The Brokpa Dards are a proud race. Legend has it that centuries earlier when attacked by Tibet, the Brokpa chieftain Shali chose to die rather than submit to the Tibetan King’s demand for the tribe to do free labour.

The Brokpa Dards are obsessed with purity. They worship the mountains, the rivers, the land and though some call the clan Buddhists, they also practise an animist religion called Bon.

They are friendly, and speak Hindi, even though their own language is Shina. They are curious to see tourists, and warmly respond to any questions. It makes one realize that its not a lost civilization that we have entered, for they like Bollywood and some of the youngsters now study in Jammu and Leh, or sell fruits in Leh town.

We travellers have this fantasy of discovering a place nobody has ever gone to. We fantasize about coming across a tribe that have no contact with the outside world. We are all attracted to mystique and exotic.

Whether or not the Brokpas will be able to hold onto their unique cultural heritage, or they will fall prey to the temptations of tourism and the glamour of life in the cities, we do not know. The hope is that they can keep teaching their coming generations their proud past, their customs and traditions. Even if they believe they are Aryans or not, it is alright. Author Scott Turrow gives an interesting perspective in the book ‘The Ordinary Heroes’,

“Who are we but the stories we tell ourselves, about ourselves, and believe? Why should the Brokpas be any different?”

On His Own Trip will try and see if we can add a small cultural visit to these villages sometime in the future.

To read more stories of ours from Ladakh,