Today’s 31st July. Two years to the day, my book “This Guy’s On His Own Trip” got released. It came out in the height of pandemic, and during thar fateful year, it was writing it, and then seeing the response it got, that kept me so happy.

I remember 31st July 2020. I was super nervous. Having dreamt about writing a book for over 15 years, when it did come out that day, I had all kinds of thoughts. If even 100 people would read it, if they would like it. Would my parents like it!

Over the next few weeks and months, I was overwhelmed. It became an Amazon Bestseller the very first day it came out. Friends who had never read a book, put up statuses on Insta and Fb, sharing the purchase. Some friends bought 10-15 copies and gave it to people in their Circle. A few friends made an online group and would read through online book clubs and recommend my book there. Why? Just out of love.

Receiving messages from strangers about the book in the last two years has been such a feeling. When people say they were disappointed it ended at 236 pages, when people say it helps them through a bad day or phase, when people quote lines from the book, it makes me so happy . When doctors would write to me saying that they were going insane with the long hours during covid and would steal out of their rooms for 15 mins and read the book, I was stunned.

Maybe I felt happiest when mum dad, both avid readers, said they thought I had written it well.

For years, I had thought writing a book and it’s success in terms of sales would make me happy. Truth be told, its the unconditional love that friends, family and strangers gave me after reading it in terms of their gestures, that humbles me most.

Thank you everyone, who read it, or asked anyone else to do so. Happy two years! 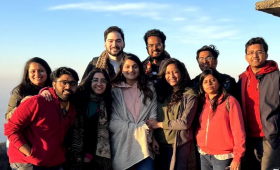